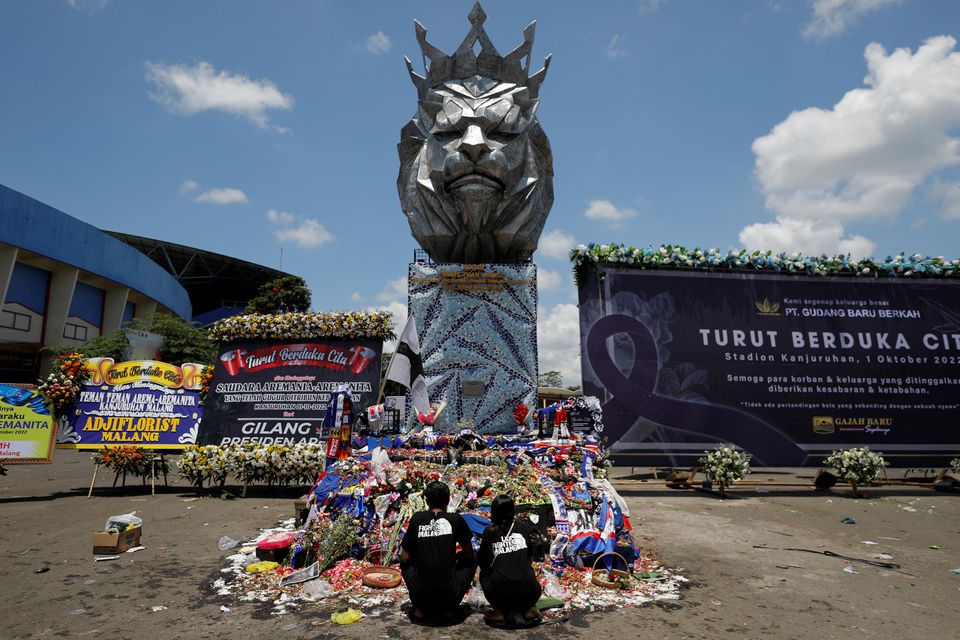 Arema FC supporters pray at a monument as they pay their condolences for the victims of a riot and stampede after a soccer match between Arema vs Persebaya, outside Kanjuruhan stadium in Malang, East Java province, Indonesia, October 4, 2022. (Reuters Photo)

JAKARTA - Six people including police and match organisers are facing criminal charges in Indonesia over a stampede at a football game at the weekend that killed at least 131 people, the country's police chief said on Thursday.

Saturday's stampede in the Malang region of East Java was among the world's worst sporting disasters, as hundreds of football fans tried to flee a stadium riot and the firing of tear gas by police, leading to a crush worsened by several locked exits.

Police chief Listyo Sigit Prabowo told a news conference that organisers and police were among those being investigated and more people may be charged.

They would be charged with criminal negligence causing death, which carries a maximum five-year prison sentence if found guilty.

The suspects include three police officers over their use of tear gas, the head of the organising committee and the chief security officer of the home club Arema FC.

Police said the club's officials had not complied with safety requirements and had allowed a crowd larger than the stadium's capacity, while stewards had abandoned exits.

Police have said the exits where fleeing people escaped were too narrow to pass through, while the country's football association said some exits were locked.

The government had set up a fact-finding team in an effort to reveal the culprits of the deadly stampede, among the deadliest football-related tragedies since a crush in Peru in 1964 killed more than 300.

The investigation comes as President Joko Widodo ordered an audit on the stadia across the country to make sure the country's security is up to code, adding that "locked doors and steep stairs" were key factors in the incident.