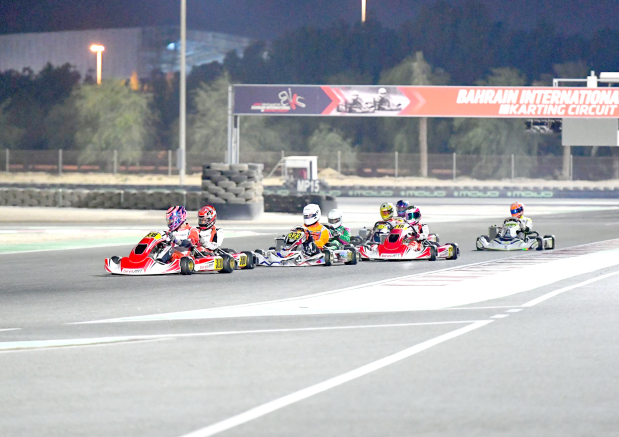 The 2022-23 Sakhir Rotax MAX Challenge (SRMC) wraps up this weekend at Bahrain International Karting Circuit (BIKC) in Sakhir with its final two rounds taking place on back-to-back days on Friday and Saturday.

The kingdom’s vibrant karting community will once again descend on the world-class grassroots motor racing facility of Bahrain International Circuit (BIC), with all still to play for in this SRMC campaign and the newest champions set to be crowned.

Both meetings feature identical timetables, with Qualifying Practice kicking off the on-track action at 2.50pm. The Pre-Finals will then be held from 3.54 pm and then the Finals from 5.05pm.

The Micro and Mini classes will be taking to the track together for each session, while the Juniors will be running alone. The Seniors and the Senior Masters will also hit the tarmac at the same time for all the sessions.

The karting action will be taking place along BIKC’s 1.414-kilomere CIK-FIA Track. It will be followed by the podium ceremonies, set for an estimated 5.35pm start.

The SRMC is a top-class local series that will see the competitors line up on the grid in their very own Rotax-powered karts. This campaign marks its second season as it builds on the momentum gained by the opening championship.

Barbier has 69 points atop the Micro MAX class, followed by Ali Almoayed with 50 and Mohammed Waleed with 24.

Isa Almoyaed leads a very tight battle in the Mini MAX category with 62 points, just a single point ahead of Shaikh Ahmed bin Saqer Al Khalifa. Rashid Kanoo is also not far behind with 53 points in third place.

Houghton tops the Junior MAX class with 68 points - 10 ahead of Gracie Rose Grantham and 18 from Mohammed Alhasan. Smith is in first place in the Senor MAX category with 68 points, trailed by Oliver Kruglov with 54 and Tijl Joep Huisman on 39.

After the completion of this weekend’s racing, the SRMC will then set the stage for the Bahrain Rotax MAX Challenge (BRMC), which will flag off just a few weeks after in November with the first of eight fantastic rounds.

The racing is being organised by BIKC in cooperation with BIC and the Bahrain Motor Federation.

More information on the BRMC can be found on bahraingp.com, by calling BIKC on +973-17451745 or on the social media channels of BIKC and BIC.