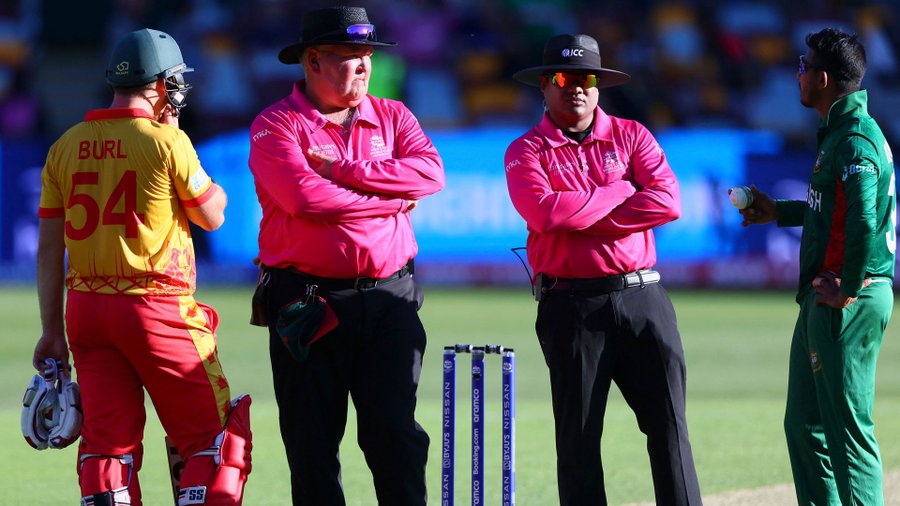 MELBOURNE:  Bangladesh survived intense drama and a chaotic final over before prevailing by three runs in a T20 World Cup thriller against Zimbabwe in Brisbane on Sunday.

Chasing 151 for victory in the see-saw contest, Zimbabwe slumped to 35-4 in the powerplay but Sean Williams's valiant 64 left them needing 16 runs off the final over from off-spinner Mosaddek Hossain at the Gabba.

Zimbabwe scored 11 off the first five deliveries, losing two wickets in the process, but Blessing Muzarabani was stumped off the sixth, prompting celebration in the Bangladesh camp.

The stumps had already been pulled and the players were shaking hands when they were told by the umpires that the match was not yet finished, with the final delivery of the over adjudged a no-ball. Replays confirmed Bangladesh wicketkeeper Nurul Hasan had collected the ball in front of the stumps, not behind, before stumping Muzarabani.

Muzarabani took strike again to face the free-hit delivery from Mosaddek, but his wild swing did not connect with the ball and Bangladesh went on to register their second Super 12 victory.

"I have never experienced something like this," said opener Najmul Hossain whose career-best 71 fired Bangladesh to a competitive 150-7.

"It's not just me, it was a new experience for all of us in the team."

Earlier, Muzarabani struck twice in the powerplay to reduce Bangladesh to 32-2 before Najmul combined with skipper Shakib Al Hasan (23) in a 54-run stand to prop up Bangladesh.

Afif Hossain, dropped twice by sloppy Zimbabwe fielders, scored a breezy 29 down the order as Bangladesh milked 87 from the final 10 overs to reach the 150-mark.

Najmul's maiden T20 half-century, the first by a Bangladesh batter in this year's tournament, included seven fours and a six.

When they returned to defend, Taskin Ahmed (3-19) removed both openers and Mustafizur Rahman claimed two wickets in his first over to rattle Zimbabwe.

With captain Craig Ervine and the talismanic Sikandar Raza back in the hut, the onus was on Williams to put Zimbabwe's chase back on track.

Williams combined with Ryan Burl, who made 27 not out, and threatened to pull off a thrilling chase but Shakib ran him out with a direct throw to turn the match on its head.

Zimbabwe were on a high after their giant-killing act against Pakistan, but the defeat dents their chances of reaching the semi-finals.

"Obviously we're unhappy but it's an attitude for us that we got to take the positive from today and move into tomorrow with that," Williams said.