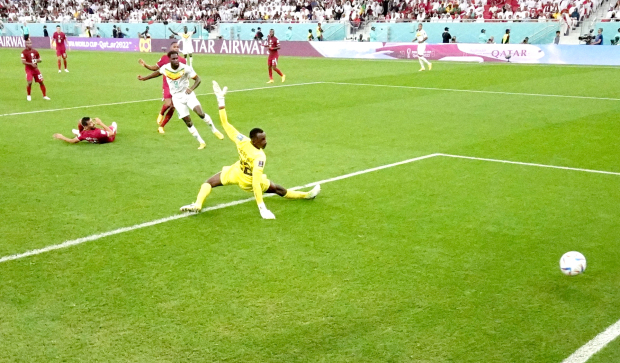 The World Cup hopes of Qatar were dashed after a 3-1 loss to Senegal and a draw between Ecuador and Netherlands left them bottom of Group A with no chance of progressing, just five days after they opened the tournament with a 2-0 loss to Ecuador.

The Qataris needed Ecuador to win but they fell behind to an early Cody Gapko goal, and though they equalised it wasn’t enough to prevent Qatar from becoming the first side mathematically eliminated from a finals they have spent a reported $200 billion to host.

The reigning Asian champions were undone by sloppy defending that was harshly punished by a Senegalese side that was just that little bit better in every department.

With the hosts defending well, it was going to take either a moment of magic or a catastrophic mistake for Senegal to break the deadlock and unfortunately for Qatar defender Boualem Khoukhi it turned out to be the latter.

His attempt to clear a routine low pass into the box by Krepin Diatta went disastrously wrong as he fluffed his clearance, allowing Boulaye Dia to pounce, and he rattled home the opening goal just before the break.

Famara Diedhou doubled Senegal’s advantage with a brilliant glancing header from an Ismail Jakobs corner in the 48th minute.

The hosts registered their first efforts on target in the tournament, with Ismail Mohamad forcing a superb reflex save from Edouard Mendy.

Muntari reduced the deficit in the 78th with a bullet header from Mohamad’s cross for Qatar’s first ever goal at a World Cup in their debut tournament but Senegal were unruffled as they continued to out-muscle their opponents in midfield.

Six minutes after Muntari’s strike, Bamba Dieng swept home a pass form fellow substitute Iliman Ndiaye for the African side’s third to consign Qatar to the bottom of Group A with no points, while Netherlands and Ecuador have four points and the Senegalese three.

In Group B, Iran scored twice after the eighth minute of stoppage time to snatch a stunning 2-0 win over Wales that breathed new life into their World Cup campaign and left the Welsh flat on their backs and facing a make-or-break decider against England.

England, meanwhile, suffered a sobering reality check as they were outplayed for long periods by a youthful United States side in a tense 0-0 draw.