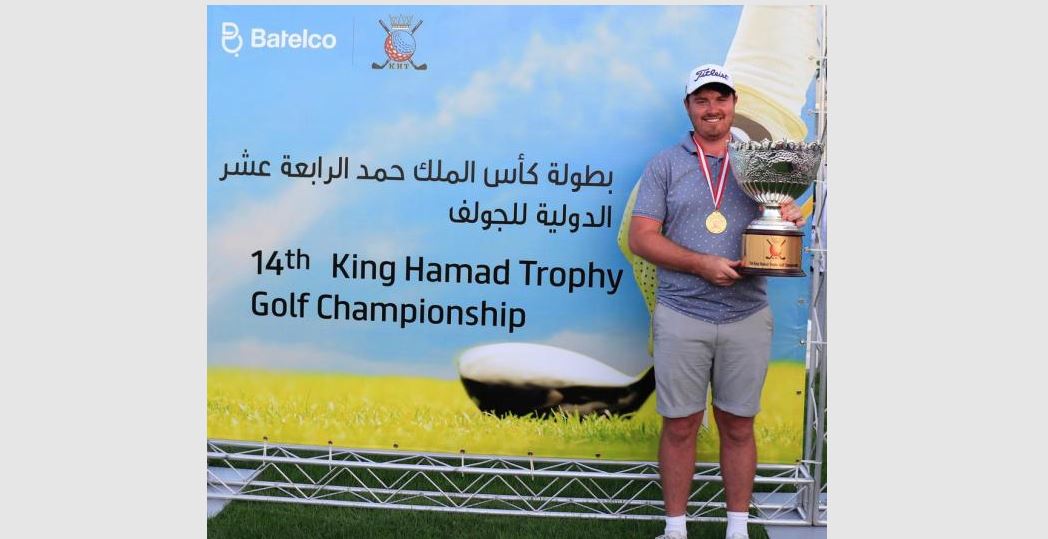 Sloman with the trophy

TOM Sloman carded an eight-under-par 64 on the final day of the 14th King Hamad Trophy to storm to an incredible come-from-behind title triumph with a three-under-par 203 gross at the Royal Golf Club (RGC) yesterday.

The 26-year-old Briton, currently the MENA number one, had started the day languishing ninth on the leaderboard with a five-under-par 139, six strokes behind overnight leader and compatriot, Joshua White, who had finished the second day with an 11-under-par 133 after carding an eight-under-par 64 himself.

But White struggled to repeat his second-day performance, eventually carding a one-over-par 73 to finish with a par 206 gross, three strokes behind Sloman.

Ireland’s Hugh Foley, an amateur who was in joint-third position overnight with an eight-under-par 136, also had a disappointing day, finishing with a two-under-par 70 and a 206 gross to put him in joint-second position with White.

Sloman’s victory means that the Chelsea fan, who represented Great Britain and Ireland in the 2019 Walker Cup before turning professional, continues to enjoy a spectacular run of success in 2022, having won the Laguna Phuket Challenge in May before capturing the 2020+ Journey to Jordan crown and the top spot in the MENA rankings.

Meanwhile, a senior Bahrain Golf Association (BGA) official said that the 2022 King Hamad Trophy, which featured more than 40 professional and amateur players from 20 countries, had achieved its objective by creating a competitive environment for local golfers to experience.

“This year’s championship attracted many tour professionals from the United Kingdom (UK) and Sweden,” BGA vice president Daij Khalifa, who was also the tournament director for the competition, told the GDN.

“The standard of play was very high and bolstered the BGA’s objective to establish a very competitive environment for young Bahraini golfers to compete in.”

“We had an excellent three days hosting the 14th King Hamad Trophy at the RGC,” he told the GDN.

“We would like to congratulate Tom Sloman on his victory and would like to say ‘Well done!’ to all the players who took part. Special thanks to Daij Khalifa and the team at the BGA for all their hard work and we look forward to hosting the event again next year.”