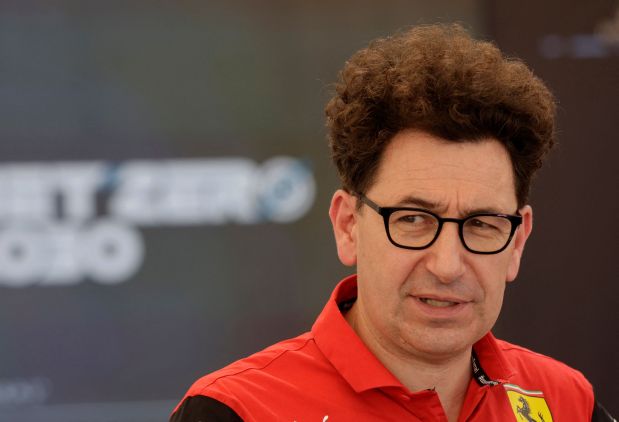 Ferrari Formula One boss Mattia Binotto has handed in his resignation and will leave at the end of the year, the world championship runners-up said on Tuesday.

The news came after considerable media speculation that the 53-year-old, whose contract was due to expire at the end of 2023, had lost top-level support after another failed title challenge.

Ferrari had said this month that rumours of Binotto facing the sack were 'totally without foundation' and the principal assured reporters on Nov. 19 that he was relaxed about his future.

He stopped short then of categorically stating he would be in his current job at the start of next year, however, and the silence of company chairman John Elkann was telling.

"With the regret that this entails, I have decided to conclude my collaboration with Ferrari," the Italian sportscar manufacturer quoted Binotto as saying in a statement announcing his departure.

"I am leaving a company that I love, which I have been part of for 28 years, with the serenity that comes from the conviction that I have made every effort to achieve the objectives set.

"I leave a united and growing team. A strong team, ready, I’m sure, to achieve the highest goals, to which I wish all the best for the future. I think it is right to take this step at this time, as hard as this decision has been for me."

Ferrari said they had started the search for a replacement, likely to be finalised in the New Year.

Italian media have suggested Ferrari Chief Executive Benedetto Vigna could take on the role on an interim basis.

Frederic Vasseur, a Frenchman who runs Swiss-based Sauber and is principal of the Ferrari-powered Alfa Romeo team, has also been touted as a likely successor.

Vasseur and compatriot Nicolas Todt, manager of Ferrari driver Charles Leclerc and son of former boss Jean who presided over a golden era at Maranello with Michael Schumacher, are close and founded the junior series ART racing team together.

Stellantis-owned Alfa Romeo are due to end their sponsorship of Sauber at the end of 2023, with the team then becoming the Audi factory outfit from 2026.

Ferrari made a strong start to this season after two years without a win, expectations soaring after Charles Leclerc triumphed in two of the first three races and finished second in the other.

Their hopes were dashed by mechanical unreliability, strategy errors and driver mistakes.

Red Bull's defending champion Max Verstappen won five of the next six races and ended the 22-round season with a record 15 victories while Leclerc and team mate Carlos Sainz fended off a challenge from a resurgent Mercedes for second place.

Binotto has spent his whole career at Maranello, a highly-regarded engineer who became head of the engine department in 2013 and chief technical officer in 2016.

He took over as team boss in January 2019, replacing Maurizio Arrivabene - CEO of Serie A soccer side Juventus whose board resigned on Monday.

Binotto kept his calm in the face of huge pressure, carefully analysing the team's setbacks and defending his employees, but ultimately the results were not good enough.

The sport's oldest and most successful team, present in every championship season since the first in 1950, slumped to sixth overall in the 2020 constructors' standings -- their worst season in 40 years -- but recovered to third in 2021.

Ferrari have not won a constructors' championship since 2008, while now-retired Kimi Raikkonen was the last driver to take them to the top in 2007.