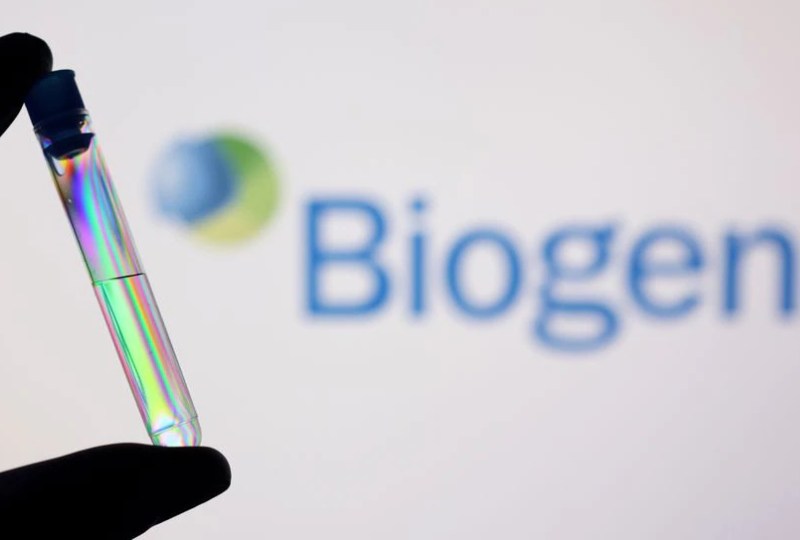 FILE IMAGE: A test tube is seen in front of displayed Biogen logo in this illustration taken, December 1, 2021. Reuters Photo

The first big breakthrough in 30 years of Alzheimer’s research is providing momentum for clinical trials of “cocktail” treatments targeting the two hallmark proteins associated with the mind-robbing disease, according to interviews with researchers and pharmaceutical executives.

Drugmakers Eisai Co Ltd and Biogen reported in September that their therapy lecanemab could slow progress of the disease by 27% over 18 months compared with a placebo.

The finding validates the theory that clearing the amyloid protein that forms clumps in the brains of Alzheimer’s patients could slow or halt the disease and has strengthened the support from some scientists for simultaneously targeting another notorious protein linked to Alzheimer's: tau.

Eisai and Biogen are scheduled to present full data from their lecanemab study on Tuesday at the Clinical Trials on Alzheimer's Disease conference in San Francisco. The US Food and Drug Administration is expected to make a decision by early January on the companies’ application for accelerated approval.

If approved on an accelerated basis, the companies said they would immediately apply for full US regulatory approval which could help secure Medicare coverage.

"I think lecanemab has reinvigorated the idea that now you could do a combination of amyloid (and) tau,” Dr. Reisa Sperling, a neurologist and Alzheimer’s researcher at Harvard Medical School, said in an interview.

Tau naturally accumulates in a memory center of the brain called the medial temporal lobe as people age. A growing body of research suggests that rising levels of amyloid in Alzheimer’s patients act as an accelerant, causing an explosive spread of tau that forms toxic tangles inside brain cells, eventually killing them.

“We’ve been trying to do combination trials for years,” Sperling said. Nearly a decade ago, Alzheimer’s experts met in Washington to discuss testing combined therapies. At the time, “no one would listen,” she said.

Now, however, Sperling and other researchers in the Alzheimer's Clinical Trials Consortium (ACTC), a research network backed by the National Institute on Aging, say drugmakers are increasingly interested in participating in a study to test tau drugs alone and in combination with anti-amyloid drugs such as lecanemab.

“We've been talking to multiple companies about working with us on our proposed platform, which can evaluate multiple drugs, and everybody's interested,” said Dr. Paul Aisen, director of the Alzheimer’s Therapeutic Research Institute at the University of Southern California’s Keck School of Medicine, and a leader with Sperling of the ACTC.

The scientists said they expect an answer on funding by year-end. NIH said it does not discuss grants under review.

More than 6 million Americans have Alzheimer’s, costing the U.S. economy nearly $6 billion a year in direct spending and unpaid caregiving expenses, according to congressional briefing documents. By 2050, Alzheimer’s cases are expected to double to 12.7 million, bringing the total yearly cost to nearly $1 trillion, according to the documents.

Last year, the FDA gave Biogen and Eisai’s drug aducanumab conditional approval even though it failed one of its two late-stage trials. The approval was based on the drug’s ability to remove amyloid from the brain.

Biogen initially priced the drug at $56,000 a year, but the US Centers for Medicare and Medicaid Services said it needed more compelling evidence, and that Medicare would only cover the drug for use in clinical trials.

Lecanemab’s success rests on years of research into the causes of Alzheimer’s as well as advances in measuring amyloid deposits through brain scans and spinal fluids. Trials of tau drugs will aim to build on that progress, using brain scans, spinal fluids and blood tests to better assess the stage of disease, when to intervene and whether the drug is hitting its target. That would allow companies to test drugs even before symptoms emerge.

Nearly a dozen drugmakers, including Roche, Merck & Co, Johnson & Johnson and Eli Lilly and Co, are working on therapies that target tau. At least 16 treatments are being tested in clinical trials, with results expected over the next three years, according to a Reuters review of the clinicaltrials.gov registry.

Merck is testing its MK-2214 therapy aimed at clearing tau in patients in very early stages of the disease in several small trials.

"The understanding of the disease is getting much, much better," said Jason Uslaner, Merck’s head of discovery neuroscience. The drugmaker has been largely absent from the Alzheimer's space after the high-profile failure of its drug verubecestat five years ago.

So far, only a few trials combine an amyloid-lowering therapy with a drug that targets tau in a “cocktail” approach, similar to those used against cancers and HIV.

Such combinations may improve on the benefit of lowering amyloid alone in people who have symptoms, researchers told Reuters. And when used earlier in the disease, the hope is that they might prevent dementia altogether.

“It may be that you need both - the removal of amyloid that's driving that biological cascade - and you need to clean up any tau that's already spreading from one cell to another,” said Dr. Adam Boxer, a tau expert at the University of California San Francisco (UCSF) Memory and Aging Center.

But several antibody therapies from Lilly, Biogen and AbbVie that were designed to slow the rate of tau accumulations failed outright last year. A drug from Roche, semorinemab, showed limited effectiveness.

"It took maybe 20 or 30 years before we found a drug that really targeted the right form of amyloid to make a difference,” Boxer said. “It’s still early days.”