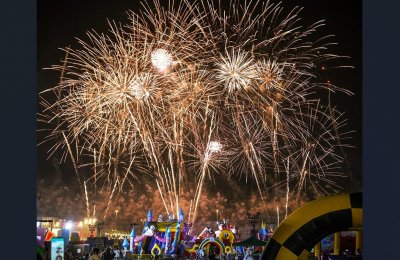 Sheikh Zayed Festival has revealed the schedule of events and activities for the Festival’s 51st National Day of the UAE celebrations, running from 2 pm until 1 am over the course of three days, starting December 1.

The festivities include drone shows, a huge fireworks display, the Union Parade (on December 3), the Global Civilization Parade, the Emirates Fountain Shows and many other cultural and heritage festivities.

The program combines several cultural and heritage entertainment attractions held in a joyful family-friendly environment that is meant to bring the celebratory spirit into the hearts of the Festival’s visitors coming from different parts of the country, including tourists from around the world who will take part in the 51st National Day of the UAE program.

On December 2 and 3, under the theme "Together for the Future", the Festival skies will light up with state-of-the-art drones that will showcase spectacular art formations, fireworks displays, in addition to the impressive Emirates Fountain and Laser Shows that will illuminate the Al Wathba skies with the colours of the Emirati flag to tunes of Emirati traditional songs.

Visitors of the Festival will have an opportunity to watch the live broadcast of the official UAE 51st National Day celebration on various screens set up around the Festival premises.

On December 4, the Ministry of Interior will hold a military show to celebrate the joyous occasion at the Festival with the mounted team, the motorcycle team, bicycles, sand bikes, police dogs and the GTR patrol.

The Festival pavilions will hold many events and shows to celebrate the national holiday with multiple folkloric performances in celebration of the 51st National Day of the UAE. They will also take part in the Global Civilization Parade, which will roam around the Festival grounds.

Visitors can also explore the wonderful Heritage Village, located at the centre of the Festival, which celebrates ancient traditions and culture of the United Arab Emirates by reflecting the UAE's civilization and long history across four different environments: the marine, land, mountain and agricultural environments.

Visitors will have a chance to enjoy various activities that will entertain everyone in the family, such as the Fun Fair City, Children’s Theatre, and the Glow and Flower Garden. The theatres of the participating countries’ pavilions will present beautiful artistic shows and render wonderful folkloric songs, with performers from international groups donning their distinct national costumes. Al Forsan International Sports Resort will organize many sporting activities designed to suit visitors of all age groups, such as the mobile archery centre, bow and arrow shooting, axe throwing, air shooting and many others.

The Sheikh Zayed Festival is an annual mega event that attracts visitors from across the UAE, the region, and from around the world to a large-scale celebration of cultural heritage through exhilarating events and memorable attractions. – TradeArabia News Service