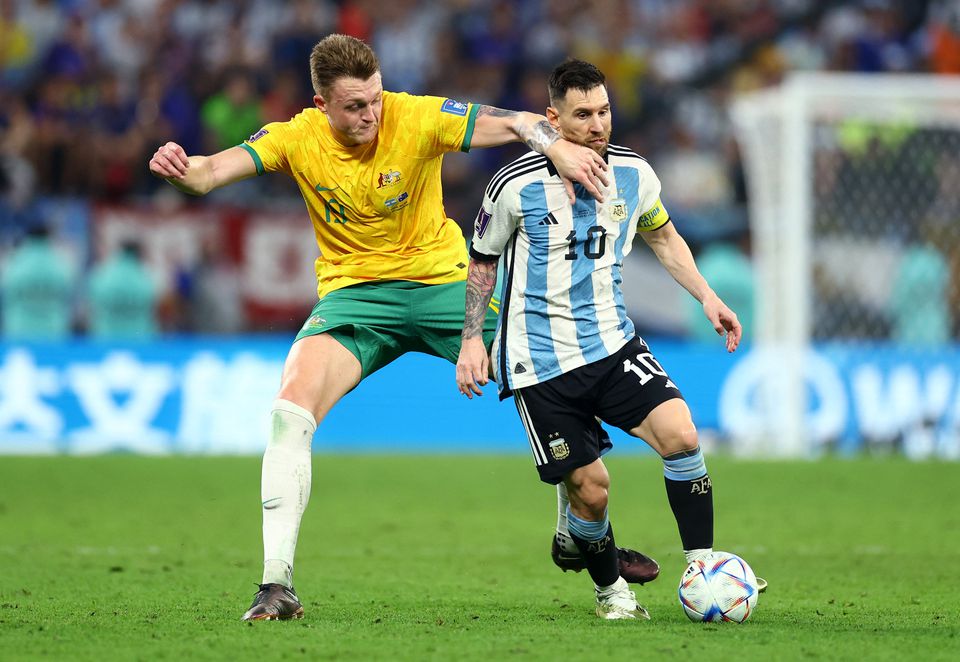 Argentina's Lionel Messi in action with Australia's Harry Souttar REUTERS/Carl Recine
LIONEL Messi scored his first goal in a World Cup knockout match on his 1,000th career appearance as twice champions Argentina beat off a late fightback by Australia to win 2-1 yesterday and reach the quarter-finals.
In the other round of 16 match yesterday, Denzel Dumfries set up the first two goals and netted a decisive third to ensure a 3-1 victory for the Netherlands over the United States and a spot in the World Cup quarter-finals, thwarting their opponent’s efforts at a late comeback.
Messi put Argentina ahead after 35 minutes with a coolly taken strike low into the corner for his 94th international goal to pass the great Diego Maradona’s tally of eight World Cup goals for the South Americans.
Julian Alvarez added a second close to the hour mark after a howler by keeper Mat Ryan that put the game beyond Australia and set up a mouth-watering last-eight clash with the Netherlands.
Argentina took a while to get into a match that started off scrappy, with Alejandro Gomez, Enzo Fernandez and Alvarez combining well but unable to break down a resolute defence.
Gomez had an early chance when he was clear on the left and cut inside but fired off a shot that went wildly wide, while Messi struggled to make his mark in the early exchanges.
Australia had their best chance from a corner near the half-hour mark when Harry Souttar, over two metres tall, climbed high to head down from a corner but his effort lacked power.
Buoyed by rapturous, overwhelmingly Argentine support that sang and bounced in unison on all four sides of the stadium, Argentina pressed and finally made the breakthrough, with Messi involved in the start and finish.
He took a free kick that was cleared and eventually found Alexis Mac Allister and he passed to Nicolas Otamendi, who tapped it back for Messi to fire low beyond the reach of the outstretched Ryan.
In the other match, Dumfries ended any hopes the Americans had of staging a rescue act after they had gone 2-0 down at halftime, but the United States fought back to reduce the deficit through Haji Wright in the 76th minute.
The Dutch had looked to be comfortably in command of the opening Round of 16 tie in front of 44,846 spectators with two goals scored in a similar fashion as Dumfries crossed from the right for Depay to net first in the 10th minute, and then Blind on the stroke of halftime.
But Wright pulled a goal back to offer the Americans hope of a comeback.