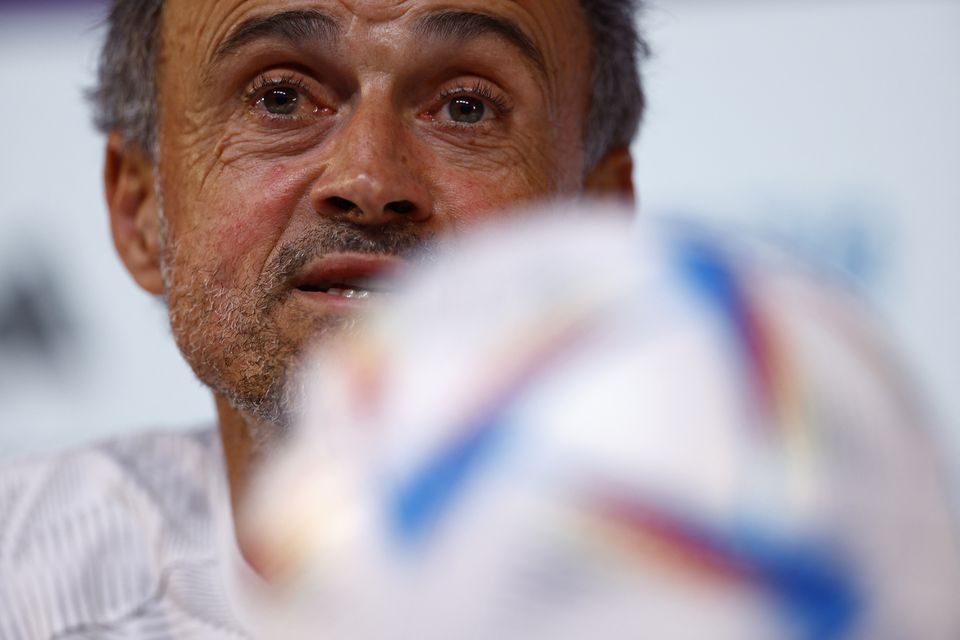 Spain coach Luis Enrique is convinced his players can overcome Morocco in the World Cup last 16 on Tuesday and deal with the pressure of a penalty shootout if they need to.

Morocco were surprise group winners ahead of favourites Croatia and Belgium. Spain finished second in their group after losing to Japan to set up Tuesday's last-16 clash against the only African team left in the tournament.

At last year's European Championship, Spain were involved in two shootouts, beating Switzerland in the quarter-finals before they were knocked out by eventual champions Italy in the semis.

"Over a year ago, in many national camps we told players, 'You have homework ahead of the World Cup. You must take at least 1,000 penalties with the club'. You can't just train them when they're with the national team'," Luis Enrique told reporters on Monday.

"I don't think it's a lottery. If you train often, then the way you take penalties improves. Obviously, you can't train the pressure and tension, but you can cope with it.

"It doesn't depend on luck, the goalkeeper is key in the shootout. All three of our keepers are good at them. In our sessions we have players taking penalty kicks, it's homework we've taken into account."

Luis Enrique gave his team a B+ for their group stage performances, highlighting the 15 minutes against Japan when they were "steam-rolled".

"We have a clear idea," he said. "We don't have to dominate all opponents for 90 minutes. In the World Cup you have the best teams, you're playing against top level coaches and players," Enrique added.

"Morocco are in the best mood at the moment, they're highly motivated after a spectacular group stage, they topped a tricky group.

"I'm very satisfied with what I've seen in training, I'm convinced we have a great chance to achieve a good result and advance."

In the last four World Cups, Spain have only got past the last 16 once -- when they were crowned champions in 2010.

"Football is not always a fair game. I'm convinced we have more merits than Morocco. If we don't, I'll be totally fine.

"Our philosophy is the same. We try and entertain the fans so they have fun watching us. We shouldn't just go and get the victory, we need to entertain the spectators."

Barcelona midfielder Pedri, who turned 20 during the tournament, is well aware of Morocco's style.

"They have a very physical midfield, they close up all the spaces. Many national teams play us one-on-one, we know they will press us hard in midfield to get the ball from us," Pedri said.

"I'm sure Morocco have analysed our movement. There are things to improve and I think we'll play a great match. We're eager to play and turn sadness (from the Japan defeat) into happiness."