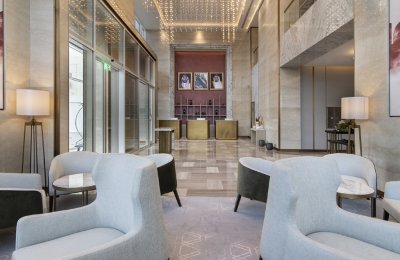 Ramada by Wyndham Riyadh King Fahd Road
Wyndham Hotels & Resorts, the world’s largest hotel franchising company with approximately 9,100 hotels across more than 95 countries, continues its growth trajectory across Europe, Middle East, Eurasia and Africa (EMEA), reaching over 550 hotels in the region, it said.
The expansion is achieved through a number of important openings in the year, and a strong line-up of property launches expected in the coming months, the group said.
In the Middle East, Wyndham continued to bring more accommodation options to Dubai, with the launch of Wyndham Residences on Palm Jumeirah, one of the most popular landmarks in the emirate. In the first half of 2022, the total number of guests within the overall UAE hotel industry increased 42% year-on-year to reach 12 million, driven by The Expo 2020 Dubai and sustained by football’s biggest sporting event in Qatar, where Wyndham opened the 278-key beachfront Wyndham Grand Doha West Bay Beach, as well as Ramada by Wyndham Doha Old Town.
In the Kingdom of Saudi Arabia (KSA), Wyndham cemented its presence with the opening of the 189-key Ramada by Wyndham Riyadh King Fahd Road, offering easy access to the capital’s businesses and commercial districts, an array of F&B outlets, a pool, an indoor sauna, a banquet facility, as well as a business centre with versatile meeting rooms. The latest opening represents the Company’s 13th hotel in KSA.
In Turkey, Wyndham strengthened its position as the largest international hotel company by the number of properties with 10 additional openings, including central locations in Istanbul, the debut of the Wyndham Garden brand right on the Antalya’s riviera as well as additional hotels in Ordu, Samsun, Rize, Mersin and Erzurum.
In Europe, Wyndham furthered its footprint in Germany, one of its largest European markets with over 130 hotels, with the opening of Ramada by Wyndham Essen, Wyndham Garden Munich Messe and Super 8 by Wyndham Koblenz, in addition to expanding its Trademark Collection brand with two hotels in Düsseldorf.
Earlier in the year, Wyndham entered Poland for the first time through the launch of the upscale Wyndham brand in the historic city of Wroclaw. The rapid expansion in Central Europe was accelerated by the acquisition of the Vienna House brand, becoming Wyndham’s 23rd brand, which added approximately 40 upscale and midscale hotels across the region, said the company.
Wyndham’s expansion in Europe included the debut of some of its iconic brands in more countries, including the stylish TRYP by Wyndham Corfu Dassia (Greece), Wyndham Garden in Florence (Italy) and a new Trademark Collection in Porto (Portugal). The Ramada by Wyndham brand also saw a large number of openings with new hotels in Slatina (Romania) and Murcia (Spain) amongst other destinations.
In India, the company surpassed its 50th hotel mark, with new openings in culturally rich destinations, such as Ramada by Wyndham Gangtok Hotel & Casino Golden, Ramada by Wyndham Station Road Katra and Ramada Encore by Wyndham Siliguri Sevoke Road. The overall hospitality industry continued to deliver robust leisure demand in India in 2022, with business travel picking up steadily in the second half of 2022, it said.
Dimitris Manikis, President EMEA, Wyndham Hotels & Resorts, said: “Travel continues to bounce back and our continued expansion across EMEA is testament to the strength and the resilience of our industry. Our latest expansion marks a key step in our quest to make hotel travel possible for all, which is particularly relevant in a diverse region like the EMEA, where we see strong potential to expand our foothold in both new and existing destinations.”
Other EMEA highlights include continued growth momentum in Georgia with the launch of Tbilisi Chambers and the Grigoleti Beach Resort, both part of the Trademark Collection by Wyndham, as well as the opening of Ramada by Wyndham Tbilisi - a 125-room hotel set in the heart of the capital’s city centre - in addition to further growth in Azerbaijan and Kazakhstan.
Some additional hotel openings expected in the coming months include:
• New openings in Turkey, with four hotels in Istanbul alone, including Days Hotel by Wyndham Istanbul Esenyurt, and further expansion in Anatolia with an additional hotel in Konya.
• New additions to the Trademark Collection in Athens (Greece), Mainz (Germany) and the ski resort town Razlog (Bulgaria).
• A 212-key Wyndham property in Bukhara, one of the most ancient and culturally rich cities in Uzbekistan.
In 2022 Wyndham launched several new initiatives to support demand to its network of hotels, including the global expansion of the Meetings Collection, a carefully curated collection of aspirational hotels and resorts in highly sought-after meetings destinations, making it simple, easy and rewarding for planners to organise multiple, multi-year meetings. The company also introduced the Road Trip Planner, the latest digital innovation to its award-winning mobile app, providing travellers with a new interactive booking tool to plot their next trip in minutes.  -TradeArabia News Service