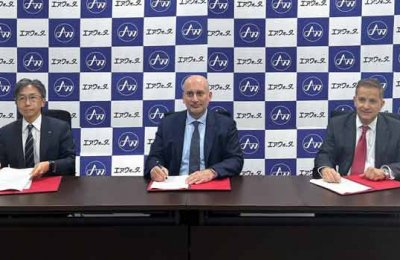 The agreement being signed
Sharjah’s BEEAH Group, UK’s Chinook Sciences, and Japanese Air Water have signed a memorandum of understanding (MoU) to produce fuel cell grade hydrogen from waste wood and plastic.
The MoU signed in Japan is a first step to forming a consortium that will advance progress on the Middle East’s first waste to hydrogen plant, located in Sharjah, and explore further opportunities across the region, a WAM report said.
Combining BEEAH’s expertise in waste management and material recovery, Chinook Sciences patented RODECS pyrolysis and gasification process, and Air Water’s Hydrogen Refinement technology, the Waste to Hydrogen plant in Sharjah will transform waste wood and plastic into fuel-cell grade green hydrogen.
On-site green hydrogen dispensing station
The plans for the Waste to Hydrogen plant include an on-site green hydrogen dispensing station capable of fuelling several vehicles. To realise this innovative type of fuelling station, the plant will need to produce fuel cell grade hydrogen, which will be made possible with Air Water’s Hydrogen Refinement technology.
Syngas produced from the RODECS pyrolysis and gasification process from Chinook Sciences will be fed into the hydrogen refinement system, resulting in fuel cell grade green hydrogen. Specifically, the grade hydrogen will be produced for PEM fuel cells at ISO14687 or SAEJ2719 standards.
Last year, following Cop26 in Glasgow, the UAE announced the Net Zero by 2050 Strategic Initiative, becoming the first nation in the Middle East to announce a net-zero emissions strategy. As part of this strategy, the UAE also announced a hydrogen leadership roadmap, which includes the production and export of green hydrogen produced through clean technologies.
Waste derived fuels
The production of waste derived fuels is a clean energy technology and through the production of fuel cell grade hydrogen, the Sharjah Waste to Hydrogen plant will potentially displace thousands of tons of CO2 every year.
Khaled Al Huraimel, Group CEO of BEEAH Group, said: “For BEEAH, the waste-to-hydrogen plant is an innovation that will enable us to eliminate the challenge of certain types of waste wood and plastic, while also producing fuel cell grade hydrogen, which is a solution for emissions-free mobility of the future. The project aligns with the UAE’s Hydrogen Leadership roadmap and demonstrates a feasible, scalable and sustainable approach to green hydrogen production.
“To achieve this kind of innovation, we partnered with Chinook Sciences to bridge the gap between waste processing and pyrolysis. By partnering with Air Water on this project, we are bringing cutting-edge hydrogen refinement technology from Japan. Together, we will break new ground in green, fuel cell grade hydrogen production for the region as well as globally.”
Pyrolysis technology
Air Water’s engineering division based in New Jersey, US, has been working with Chinook Sciences since 2004 on the active pyrolysis technology in the multi-patented RODECS process, which is a universal thermal treatment system. Air Water and Chinook Sciences have an intricate knowledge of the conversion processes in RODECS, which will inform the success of the Waste to Hydrogen project with BEEAH Group.
Dr Rifat Chalabi, Chairman and Co-Founder of Chinook Sciences, said: “In order to achieve high quality fuel cell grade hydrogen from the Waste to Hydrogen plant, Hydrogen Refinement will be a critical step. Air Water provides contaminant reduction solutions at a high level of quality and, through previous collaboration, is also closely aware of the processes involved in RODECS pyrolysis and gasification process.
“Air Water’s Hydrogen Refinement can be applied to various types of syngas that we will produce from different types of feedstocks, enabling us to effectively produce high quality fuel cell hydrogen from both unrecyclable wood and plastic waste. Leveraging Air Water’s technologies, I look forward to demonstrating a new model for green hydrogen production alongside BEEAH Group.”
Hydrogen gas market share
Ryosuke Matsubayashi, Executive Vice President and COO of Air Water, said: “We have been engaged in manufacturing and selling hydrogen gas and related equipment in the global market for many years. Air Water holds a high market share for hydrogen gas in Japan and liquid hydrogen-related equipment in North America.
“We are working to realise a decarbonised society through green hydrogen production by applying our proprietary technologies, including production, separation and recovery, purification, liquefaction, and transportation of hydrogen. We are pleased to announce that Air Water and Chinook Sciences jointly provide an innovative hydrogen production process. By combining the Chinook Sciences technology for syngas from waste and Air Water’s hydrogen production and refining technologies that have been developed over the years, we can help create a decarbonised society with BEEAH in the UAE. We look forward to the continued collaboration of our three companies and making positive environmental impact on a global scale."
The Waste to Hydrogen plant in Sharjah was first announced by BEEAH Group and Chinook Sciences Green in May 2021 and was formalised later the same year with the commencement of development plans.
Diversifying portfolio
The project will add to BEEAH Group’s diversifying portfolio of zero-waste, net-zero emissions solutions to power the sustainable, smart cities of tomorrow. At the same time, it will introduce cutting-edge technologies from UK’s Chinook Sciences and Japan’s Air Water to the UAE and the nation. By 2030, the global green hydrogen production market is expected to reach $1 trillion. As per its Hydrogen Leadership Roadmap, the UAE aims to be a hub for the export of green hydrogen and is targeting 25% of the global market.-- TradeArabia News Service