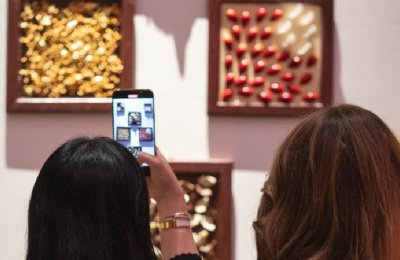 Four Seasons Hotel Kuwait at Burj Alshaya recently launched its landmark Chocolate Art Gallery, the first of its kind in the country, featuring a spectacular collection of hand-crafted chocolate sculptures.

The leading luxury destination’s Al Soor lobby lounge was transformed under the banner ‘Chocolate Art Gallery in a sweet celebration that showcased the inspired craftsmanship of the Hotel’s pastry chefs and culinary team.

The immersive installation attracted upwards of 1,000 chocolate fans throughout its twelve-day run. Guests flocked to admire a stunning collection of chocolate statues that showcased the imagination and expertise of the Hotel’s culinary artisans, while sampling a range of unique hand-crafted cacao treats. In addition to delighting sweet-toothed guests, the event also benefitted the local community with the proceeds from the sale of the main art pieces being donated to a local charity organization.

Martin Kipping, General Manager of Four Seasons Hotel Kuwait at Burj Alshaya, commented: “It’s been delightful to host the first edition of ‘Chocolate Art Gallery’, an inspiring exhibition that captured the magic of artisanal chocolate. Our culinary team produced some truly stunning pieces, and I am pleased that their efforts were appreciated by so many guests. We look forward to hosting more exciting events that will continue our Hotel’s tradition of creating meaningful experiences that connect guests to art and culture, while also contributing to the wellbeing of the local community.”

Four Seasons leaned upon the talents of its renowned cast of executive chefs. Thierry Papillier, who became the youngest executive chef for Four Seasons in 2011, played an instrumental role in creating the exhibition’s sculptures, applying his versatile skills honed within several Michelin-starred kitchens.

Executive Pastry Chef Gregory Chrismant, who has delighted guests with his craft for more than two decades at luxury hotels in Dubai and the French Riveria, was also a significant contributor to the delectable collection. In addition, Four Seasons collaborated with Kuwaiti artist Yousef Saleh, professionally known as Joegraffi, to contribute to the gallery’s design with his unique blend of ancient Arabic calligraphy and modern graffiti.

The ‘Chocolate Art Gallery’ exhibit underlines Four Seasons Hotel Kuwait at Burj Alshaya’s commitment to showcasing the work of talented artists from Kuwait and across the globe. The award-winning Hotel is itself recognised as a unique artistic and architectural marvel, having previously featured on Wallpaper magazine’s list of top ‘striking structures around the globe’.

From its illuminated 43-foot spiral ‘Stairway to Heaven’ to David Henderson’s gravity-defying Carbon Fibre Wall Sculpture, guests are invited to open their hearts and minds to wonder as they explore the Hotel’s stellar collection of international contemporary artworks. – TradeArabia News Service