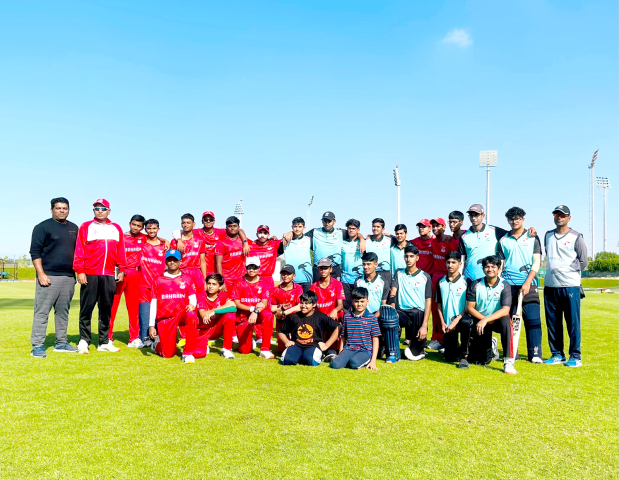 The UAE Under-16 team scraped to a three-wicket win over the Bahrain U16 side in a thrilling, 35-overs-a-side game at the Malek Oval in Ajman yesterday, writes ADNAN SIPRA.

Chasing 141 to win in the second game between the two teams, the hosts slumped to 59 for four in the 12th over and then 122 for seven in the 23rd over with 20 runs still required for victory.

Eventually, it took a gritty, 20-run eighth-wicket stand between Mohammad Ismail, who finished with 11 not out, and Jaiditya Malik, who remained unbeaten with 10, to get their team over the line.

Brilliant spells by 12-year-old leg-spinner, Mohammed Shaheen Thajudeen, who took four for 37 off seven overs, and right-arm fast bowler, Mohammad Adil Haq, who snapped up three for 23 off 4.2 overs, were the highlights of Bahrain’s bowling.

Earlier, Bahrain U16 captain Aryan Ashwin top-scored with 47 and Haq hit a run-a-ball 34 as the kingdom’s team lost their last seven wickets for 41 runs off 7.1 overs, collapsing from 99 for three after 26.5 overs, when Ashwin fell, to 140 all out with an over still left in their innings.

The tour, with two practice games against cricket academy sides as well as the two matches against the UAE U16 team, was used to try out new players who could be part of the Bahrain U16 team in upcoming Asian Cricket Council (ACC) and International Cricket Council (ICC) U16 tournaments.