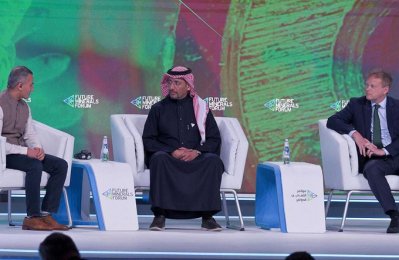 The future of mining in Saudi Arabia is promising with the unveiling of reserves of minerals valued around SR5 trillion ($1.3 trillion) for exploration, the Minister of Industry and Mineral Resources, Bandar bin Ibrahim Al-Khorayef, has said.
During a penal discussion titled, "Enhancing the mineral development in Africa and West and Central Asia", organised on the sidelines of the International Mining Conference, Al-Khorayef said Saudi Arabia is moving ahead with its endeavour to improve its value chains in gold, phosphate and aluminum. It has also achieved a great progress in laying down the infrastructure for e-cars, he pointed out, according to a Saudi Press Agency report.
British Secretary of State for Business, Energy and Industrial Strategy Grant Shapps also participated in the discussion.
They highlighted the need to take swift action to combat climate change to reach envisioned global objective of net zero greenhouse gas emissions.
Al-Khorayef underlined that the emerging mining region, extending from Africa to West and Central Asia, needs to swiftly take an action to cope with the increasing global demand on minerals, stressing the role of the United Kingdom to develop reliable supply chains for the entire region and not only for the kingdom.
Al-Khorayef also stressed the global objective of the shift to green energy cannot be realised without international collective efforts.
He also underlined the need for more focused efforts on developing minerals in the region to establish more coherent communities through unified efforts that put in place solutions attract investments and facilitate access to data and technology.
Shapps said there is broad Saudi-British cooperation in the green energy, underlying that Saudi Arabia is the most suitable place to discuss the future of minerals.
The conference saw the participation of more than 200 speakers from the kingdom and various countries on the first day to discuss key issues in minerals and mining industry at the regional and global levels.