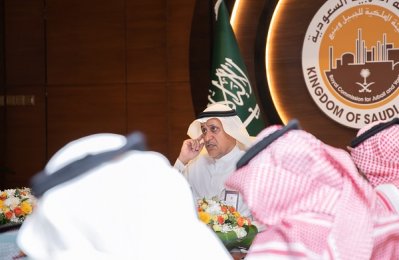 Saudi Arabia's Royal Commission for Jubail and Yanbu has signed five agreements worth more than SR43 billion ($11.4 billion) for the establishment of key industrial projects in the Saudi cities of Ras Al Khair and Yanbu.
The deals were signed on the sidelines of the International Mining Conference held at the King Abdulaziz International Conference Center in Riyadh.
These include one with the Red Sea Aluminum Industrial Company in connection with leasing of industrial land in Yanbu Industrial City to establish a factory project for smelting and rolling aluminum and its alloys, drawing, purifying and casting, in addition to casting non-ferrous metals, stated the Royal Commission in its statement.
The project, which will come up on a 7.03 million sq m area, at an investment of SR38.168 billion, is expected to provide 5,517 job opportunities in a major boost to mining infrastructure projects through a mining ore distribution port, which is a strategic gateway to access global markets, .
The second agreement was with EV Metals company (EVM) that involves the leasing of industrial land to establish a complex for the production of high-purity chemicals required for active materials in the cathode that can be recharged for lithium-ion batteries for electric vehicles and renewable energy storage.
The project will come up on a 1.27 million sq m area with nearly SR3.375 billion beiong spent on it, it stated.
Meanwhile, the Royal Commission in Ras Al Khair Industrial City too has signed three investment agreements  at the event.
The first one was with Saudi Holding Company for Conversion Industries, which includes the allocation of 157,000 sq m to establish and operate a factory for the production of aluminum foil and rolls in Ras Al Khair Industrial City, which will be an added value for its use of raw materials from Ma’aden.
To be set up at an investment of SR1.3 billion, the project aims to serve the local and global markets and is expected to create more than 350 job opportunities, said the Royal Commission.
The Royal Commission also signed an agreement with Tamouh Development and Investment Company, for setting up a new aluminium plant on a 130,000 sq m at a total investment of SR474 million.
The new industrial project will see major production of high-density aluminum fluoride, and will provide more than 127 job opportunities.
The third agreement was signed with the Petroleum Protection Services and Construction Company for allocation of 10,000 sq m area to establish and operate a ready-mixed concrete factory for marine uses.
The new project will support the ports and marine industries sector with an investment of SR5 million and also provide 75 job opportunities.-TradeArabia News Service