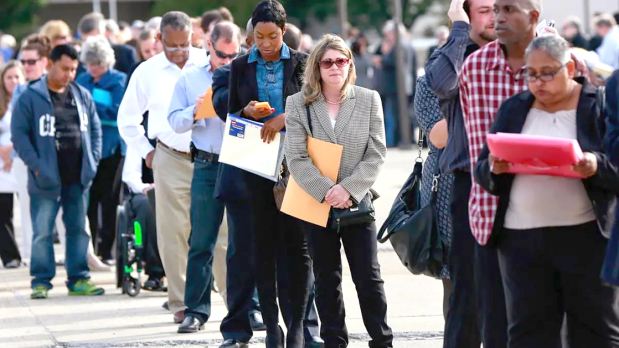 The US and other industrialised countries may be able to bring inflation down without triggering the huge jumps in unemployment that economists may have predicted prior to the pandemic, according to new research from the Federal Reserve Bank of Chicago.

If correct, that might improve the chances for a soft landing of the US economy as the Fed raises interest rates to cool price pressures.

The research examines the Phillips curve – a measure of the inverse relationship between inflation and unemployment – for 29 countries in the seven years before Covid-19 and the six quarters of pandemic recovery for which there is data, beginning in January 2021.

The authors found that in each country, including the US, the curve steepened, meaning that a decline in inflation is leading to a smaller increase in unemployment than it did before the public health crisis.

While the authors caution that their analysis is limited – there is only a year and a half’s worth of recovery data to examine – their conclusions bolster hopes that Fed rate increases can curb high inflation without causing millions of Americans to lose their jobs.

And if the researchers’ findings hold true over time, they could indicate a broader shift in the economy after years of tightly managed inflation operating largely independently from the share of Americans out of work.

“What drives our results is that declines in unemployment rates are associated with larger increases in inflation rates during the recovery from the pandemic than during the pre-pandemic period,” authors Bart Hobijn, Russell Miles, James Royal and Jing Zhang wrote in the paper.

Prior to the pandemic, the Phillips curve had been flattening for over a decade. The last time the US saw a strong relationship between unemployment and inflation was the 1960s, when declines in the former tended to be associated with increases in the latter.

But the trend line became fuzzier in the 1970s, and in the years leading up to the pandemic, inflation had remained consistently subdued even as the unemployment rate plummeted to 50-year lows – in other words, a flat curve.

Many economists, the authors of the Chicago Fed paper wrote, considered the Phillips curve “dead”.

But at least for now, the curve appears to have been revived. That means that the US and other countries now have a smaller “sacrifice ratio,” referring to the amount of additional unemployment economies would have to tolerate in order to curb inflation by one percentage point.

“Steeper Phillips curves suggest that the sacrifice ratio has declined substantially since the start of the recovery,” the authors wrote in the report.