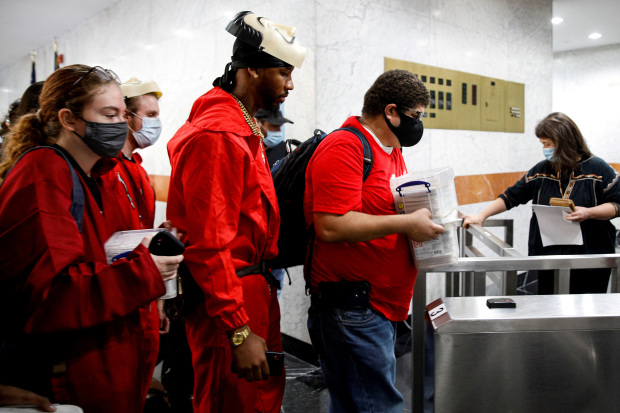 Amazon workers arrive with paperwork to unionise at the NLRB office in Brooklyn, New York, in this October 25, 2021 photograph

The tech sector has announced 97,171 job cuts in 2022, up by 649pc compared to the previous year, according to consulting firm Challenger, Gray & Christmas.

Disclosures about cuts at Google’s parent company, Microsoft, and Amazon have added another 30,000 positions in January.

Big tech companies like these benefited from a boom in e-commerce spending and remote work that kicked off during the Covid-19 pandemic lockdowns in 2020. Now, many of these businesses are reporting disappointing growth rates and dealing with sagging share prices as customer behaviour returns to normal.

Their leaders are saying they expanded too quickly, with Alphabet chief executive Sundar Pichai writing that he takes ‘full responsibility for the decisions that led us here’, in an email to employees.

Here’s a running list of who’s cutting jobs and pulling back on hiring.

Alphabet: Google parent Alphabet announced it will cut about 12,000 jobs, more than 6pc of its global workforce, in a move that will affect roles across the company.

The company had in October reported third-quarter earnings and revenue that missed analysts’ expectations, with profit dropping 27pc from a year earlier. Investors began to pressure the search giant to adopt a more aggressive strategy to curb spending. TCI Fund Management urged the company to set a target for profit margins, increase share buybacks and reduce losses in its portfolio, noting Alphabet’s headcount has swelled 20pc per year since 2017.

Amazon: The e-commerce titan is laying off 18,000 employees, CEO Andy Jassy announced on January 4. The cuts, which started last year, were initially expected to affect about 10,000 jobs.

“Amazon has weathered uncertain and difficult economies in the past, and we will continue to do so,” Jassy said. “These changes will help us pursue our long-term opportunities with a stronger cost structure.” In November, Amazon halted ‘new incremental’ hiring across its corporate workforce.

Blockchain.com: The crypto platform is letting go of 28pc of its workforce, around 110 employees, in its latest round of layoffs, announced early January.

Capital One: Capital One Financial eliminated hundreds of technology positions this week with more than 1,100 workers affected, according to a person familiar with the matter.

Microsoft: Microsoft said it will cut 10,000 jobs this year, or about 5pc of its workforce, which will result in a $1.2 billion charge in the fiscal second quarter. CEO Officer Satya Nadella said in a blog post and internal email to employees on January 18 that the company will continue to hire in ‘key strategic areas’.