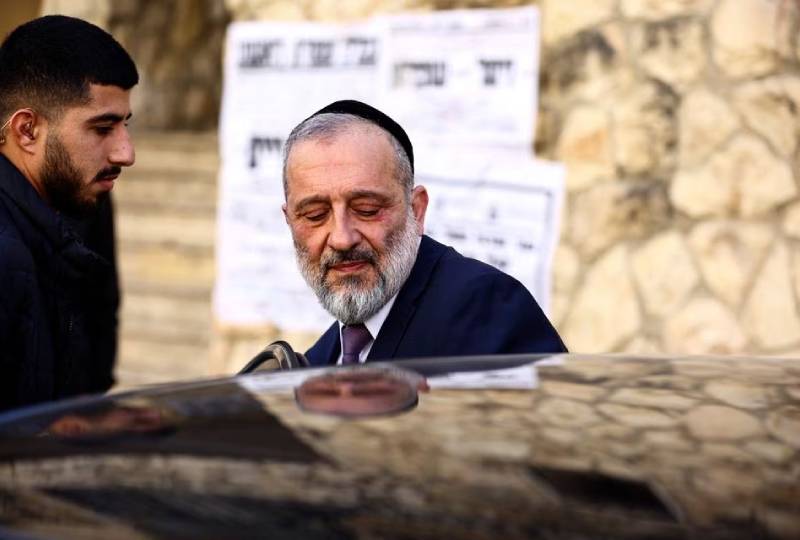 Israel's Interior and Health Minister, and the leader of Shas Party, Aryeh Deri leaves his home as he heads to a cabinet meeting, in Jerusalem January 22, 2023. (Reuters photo)

JERUSALEM - Israeli Prime Minister Benjamin Netanyahu dismissed a senior cabinet member with a criminal record on Sunday, complying with to a Supreme Court ruling even as he pursues contested judicial reforms that would curb its powers.

Pledging to find "every legal means" of keeping Aryeh Deri in public office in the future, Netanyahu told him he was being removed from the interior and health ministries during the weekly cabinet session, according to an official transcript.

A Deri confidant, Barak Seri, told Army Radio earlier on Sunday that the portfolios would be kept by other members of the ultra-Orthodox Jewish party Shas as it remains in the coalition.

That ruling stoked a stormy debate in Israel - accompanied by nationwide protests - over reform proposals that Netanyahu says will restore balance between the branches of government but that critics say will undermine judicial independence.

A poll in Israel Hayom newspaper found 35% support for Netanyahu's bid to shake up the system for bench appointments, with 45% of respondents opposed. There was just 26% support for his government's bid to enable parliament, with a one-vote majority, to override some Supreme Court decisions.

In his cabinet statement, Netanyahu described the Deri ruling as "regrettable" and "indifferent to the public will".

The less than month-old religious-nationalist coalition creaked elsewhere as a far-right partner boycotted the cabinet session in protest at the demolition on Friday of a small settler outpost that had been erected in the occupied West Bank.

Israeli Defence Minister Yoav Galant, a member of Netanyahu's conservative Likud party, ordered the outpost razed as it had no building permit - over the objections of the Religious Zionist party, which had sought to delay the decision.

The incident pitted Galant against Religious Zionism leader Bezalel Smotrich, who wields some cabinet responsibilities for West Bank settlements under a coalition deal with Netanyahu.

"This (settlements) is a capstone issue for our participation in the government," National Missions Minister Orit Strock of Religious Zionism told Israel's Kan radio. She declined to elaborate on what steps the party might take next.

In solidarity with Religious Zionism, fellow far-right coalition party Jewish Power said it would demand that Israel implement a long-delayed evacuation of Khan al-Ahmar, a Bedouin Palestinian encampment in a key West Bank area near Jerusalem.

World powers have urged Israel not to demolish Khan al-Ahmar, worrying about another potential blow to efforts to negotiate the creation of Palestinian state alongside Israel. Most countries deem Israel's West Bank settlements illegal.