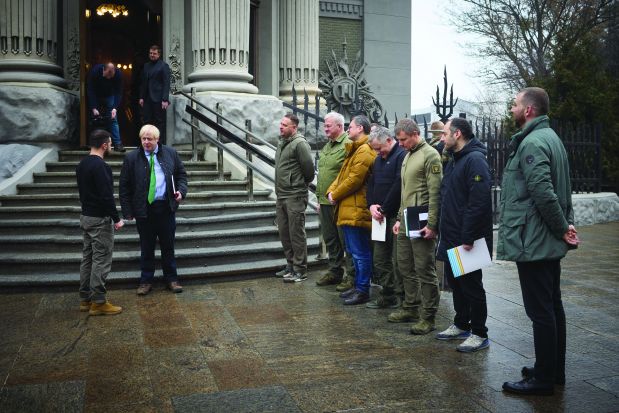 Former British Prime Minister Boris Johnson visited Kyiv on a surprise trip yesterday, meeting President Volodymyr Zelenskiy and pledging that Britain would ‘stick by Ukraine as long as it takes’.

Johnson, who left office in September in the wake of a series of scandals, was prime minister when Russia invaded Ukraine last February and he sought to position London as Kyiv’s top ally in the West.

During his trip, Johnson visited Borodyanka and Bucha, the suburbs of the Ukrainian capital that became a byword for atrocities in the West when Russian forces drove towards Kyiv in the first phase of the invasion before being repelled.

“I can tell you that the UK will be sticking by Ukraine for as long as it takes,” Johnson told the mayor of Bucha.

“You’re going to win and you’re going to get all the Russians out of your country, but we will be there for the long-term. And we will also want to be helping you to reconstruct,” he said speaking through an interpreter.

Johnson has dismissed suggestions that his activity in Ukraine could be seen as undermining British Prime Minister Rishi Sunak.

As he became embroiled in scandals in Britain, he gained widespread popularity in Ukraine where he became known affectionately as “Borys Johnsoniuk”. Cafes named cakes after him in Kyiv and street art was produced using his image.

In Bucha, Johnson took selfies with residents and laid flowers in tribute to victims of the war. He visited a church to see an exhibition and later walked the streets of Borodyanka.