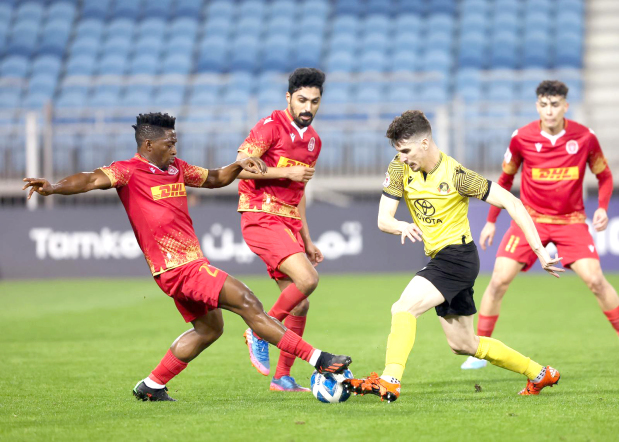 Action from the match between Muharraq and Al Ahli

Muharraq were held 1-1 by Al Ahli at Khalifa Sports City stadium in the 10th round of the Nasser Bin Hamad Premier League yesterday.

Manama scored in the 21st minute through Hichem Nekkache and maintained the lead until the final minutes of the game. However, an own goal by Waleed Al Hayam in additional time denied them victory.

Later in the evening, Hamad Nasser and Mahdi Abduljabbar were on target as Manama defeated Al Khaldiya 2-1 at Al Ahli Stadium.

Nasser put Manama ahead in the 24th minute as they led 1-0 at half-time. Al Khaldiya scored the equaliser eight minutes after the interval through Mohamed Al Marmour, but Abduljabbar struck in the 76th minute to give Manama a memorable win.

In the last match of the round, Al Hidd and Bahrain Club played out a 2-2 draw.

Thiago Fernandes scored for Al Hidd in the fifth minute of the match, but Joel struck in the 17th minute to help Bahrain Club draw level. Joel was on target again, in the 63rd minute to raise Bahrain Club’s hopes of victory, but Al Hidd bounced back through Talal Al Shurouqi’s goal in the 79th minute.

After the 10th round, Manama stay at the top of the table with 22 points, four points ahead of Al Khaldiya. Manama, also on 18 points, are third while Sitra and Riffa, with 16 points each, occupy the fourth and fifth positions.