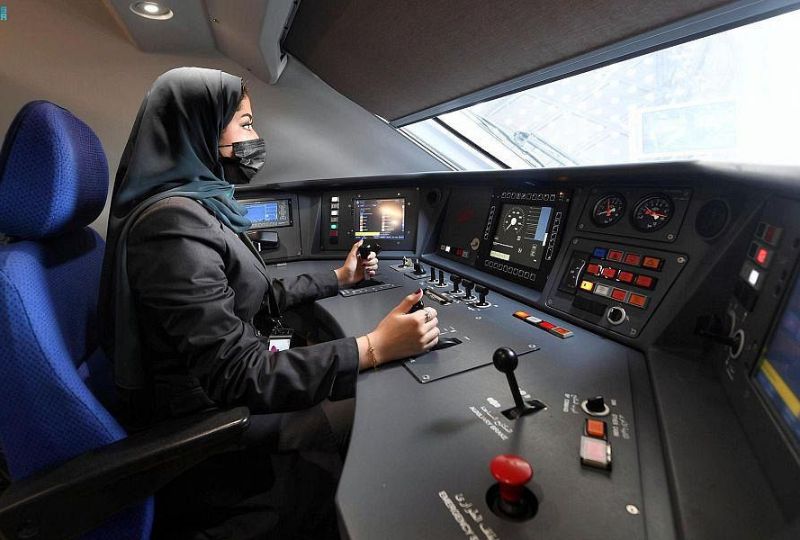 The Saudi Arabia Railways (SAR), through the Saudi Railway Polytechnic, qualified 32 women to drive the Haramain Express Train, where they started work after being trained by experts at SRP over 12 months.

"When the Saudi Railway Polytechnic announced job opportunities last January, I was keen to apply. A personal interview and test were conducted, and I was accepted as one of the first candidates. This made me highly ambitious to serve my country. The accepted candidates have been trained theoretically and practically on safety and security systems, where we also participated in driving the train," Tharaa Ali Alzahrani said.

Rotella Yasser Najjar said that the Saudi wise leadership provided the opportunity for Saudi women and empowered them to work in various fields to serve the country, including the Haramain Express Train project, which serves visitors of the Grand Holy Mosque, including Umrah performers, pilgrims, and visitors.

Talking about the sense of responsibility, Raneem Talal Azouz said that the continuous follow-up by the Saudi Railway Polytechnic trainers and their role in qualifying women drivers to work in this field enabled them to work in such an environment and overcome many difficulties, noting that serving the pilgrims, Umrah performers and visitors of the Grand Holy Mosque was the great motivation to be a driver for the Haramain Express Train.