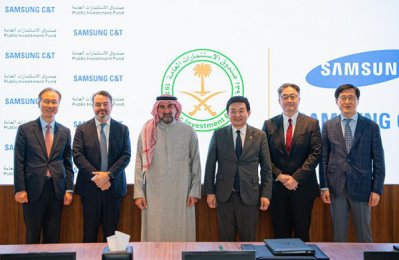 Saudi Arabia's sovereign wealth fund PIF (Public Investment Fund) said it has signed a joint collaboration agreement with a key unit of Korean construction and engineering company Samsung C&T Corporation - Engineering & Construction Group.
Under this, Saudi PIF will explore opportunities for joint collaboration in adopting and developing innovative technologies that support its real estate and construction projects.
The deal was signed yesterday (January 24) by South Korea’s Minister of Land, Infrastructure and Transport Won Hee-ryong at a meeting hosted by PIF Governor Yasir Othman Al Rumayyan in Saudi Arabia.
As part of the deal, Samsung C&T Corp will be building modular homes in Saudi Arabia in a joint investment with PIF. These residential units will either come up in the Saudi futuristic city Neom or in Riyadh, reported The Korea Economic Daily, citing a senior Korean minister.
"South Korean companies are expanding cooperation with the PIF for various sectors such as the green hydrogen production, the Qiddiya project, as well as housing complex and urban development plans," stated Won during his meeting with PIF Governor.
The minister later made a keynote presentation on cooperation between the two countries on smart cities at a major real estate forum being hosted by the Ministry of Municipal and Rural Affairs and Housing.
Won also signed a separate deal with the ministry on a smart city cooperation execution programme including a plan to hold working-level meetings in Seoul and Riyadh twice a year, stated the KED  report.
A major player in the building sector, Engineering & Construction Group was behind some of the most internationally-recognised landmarks such as Petronas Towers in Malaysia and Burj Khalifa in the UAE; and was a crucial partner in mega-infrastructure undertakings like Riyadh Metro in Saudi Arabia and Mersey Gateway in the UK.
It has also built the Qurayyah and Rabigh II power plants in Saudi Arabia, the Prai power plant in Malaysia, and a nuclear power plant in the UAE and is fast emerging as a global leader in the field of power-plant engineering and construction.