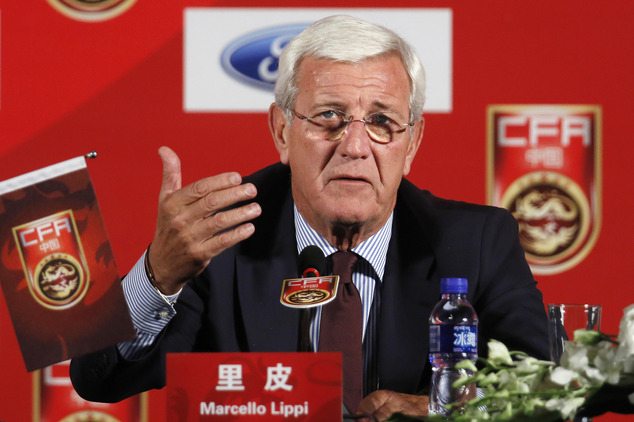 Lippi, who guided Italy to the 2006 World Cup title, was appointed in October to try and resuscitate China's floundering qualification campaign. He kicks off against Qatar in the south-western city Kunming.

China, which has qualified only once for a World Cup, has just one point from the first four games in Group A of third-round Asian qualifying, making victory against Qatar vital.

"We will focus on first dealing with the Qataris and then Korea Republic," Lippi was quoted as saying on the Asian Football Confederation's website. "Our chief aim is World Cup qualification. I hope we can achieve a miracle."

Lippi has experience in China. From 2012 to 2014, he led Guangzhou Evergrande to three Chinese Super League titles as well as the Asian Champions League crown in 2013. In a warm-up game against a lower-league Chinese team last week, Lippi selected five players from his former club, indicating a strong reliance on the team which picked up a sixth successive domestic championship in October.

"These are the players who have spent years training and playing together so they have telegraphic understanding with each other," the former Juventus coach said. "This is the key for us to play well against Qatar."

The 68 year-old Lippi's contract is not just about the World Cup, but helping the sport thrive in China in the longer term.

"Even if we fail to make it, we should make sure that the team makes good progress in the process and build for the future," he said. "Then we will switch our focus to the next Asian Cup."

Qatar, host of the 2022 World Cup, has also started poorly with three points from the first four games. A 2-1 win over 2018 host Russia in a friendly last week will boost confidence for the Qataris.

With only the top two from both six-team groups automatically progressing to Russia 2018, Japan is third in Group B, heightening the importance of a win against group leader Saudi Arabia.

Japan has appeared at the past five World Cups but some unconvincing performances under coach Vahid Halilhodzic have jeopardised a continuation of that streak.

"You can look at the Saudi game in two ways," Japan defender Tomoaki Makino said after a warm-up 4-0 win against Oman on Friday. "You can look at it as us having our back against the wall, or see it as an opportunity to turn things around."

If Saudi Arabia does slip up in Japan, Australia could go top of Group B with a win over Thailand in Bangkok. Thailand, which has lost all four games so far, had planned to hold the game in a neutral venue due to national mourning following the death last month of long-serving monarch King Bhumibol.

However the government has allowed the game to be played at home, and initial plans to ban chanting and overt celebrations has also been relaxed.

Australia coach Ange Postecoglou omitted talisman Tim Cahill from the squad but remains hopeful of extending the streak of five wins against Thailand.

"If we can get three points in this game, with the program we have next year with three home games and the Iraq game in neutral territory, we'll be in pretty good shape," Postecoglou said.

Iran, yet to concede a goal and top of Group A with 10 points, takes on Syria in Malaysia due to the ongoing war in Syria, while South Korea hosts second-placed Uzbekistan.