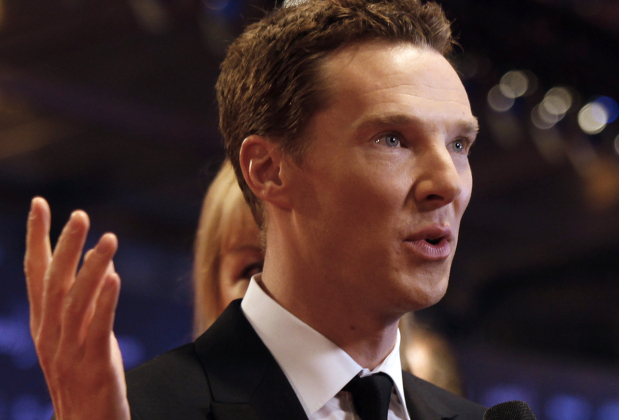 FILE - In this file photo dated Wednesday, April 15, 2015, British actor Benedict Cumberbatch arrives to host the Laureus World Sports Awards in Shanghai, China. The first of three new episodes of "Sherlock" will be broadcast Sunday Jan. 1, 2017, on BBC TV in Britain, with Cumberbatch once again taking on the role of the brilliant, demanding detective Sherlock Holmes. (AP Photo, FILE)

It may just be the diaper of baby Rosamund Watson, whose arrival at the start of the fourth season of "Sherlock" disrupts the relationship between brilliant, demanding detective Sherlock Holmes and his long-suffering friend Dr. John Watson.

The offspring of John and his enigmatic wife Mary — with Sherlock as a somewhat skeptical godfather — is one of the few things program-makers are willing to reveal before the first of three new episodes airs Jan. 1 on the BBC in Britain and on PBS in the United States.

"The unofficial alternative title for episode one is 'The Three Watsons,' because the baby changes the dynamic," said Mark Gatiss, the show's co-creator. But, he stresses: "Not in a cutesy way."

That's just the starting point for 90 minutes of virtuosic puzzle-solving, prickly friendship and the spectacular return of ghosts from one character's past.

The new episodes pick up where the previous season left off almost three years ago. Since then, fans have had to make do with a one-time special last year that took the characters back to their Victorian roots.

The show's success means Benedict Cumberbatch, who plays Holmes, and his Watson, Martin Freeman, are in huge demand, and "Sherlock" must fit around their other projects. Cumberbatch jumped back into Holmes' deerstalker hat right after finishing work on the Marvel adventure "Doctor Strange."

Everyone involved in "Sherlock" is sworn to spoiler-free secrecy about the plot, although Cumberbatch offers that it finds the great detective "at the top of his game, at the very bottom of his soul."

He says viewers will see more of Sherlock's vulnerabilities as he faces crises both personal and professional.

"It would be very dull if he was permanently a kind of impregnable hero who was always right," Cumberbatch said during a break from filming. "There's some spectacular own-goals, misses and mistakes in this series."

"It's been interesting how that person locked in a bit of glacial ice has slowly been thawed into someone we can actually relate to and understand," Cumberbatch said. "And there's a lot more of that in this series."

There is also a pivotal role for Mary, played by Amanda Abbington, whose secret past as a highly trained assassin was revealed in season three. There has been intense speculation about what will happen to her, inspired in part by the character's fate in Arthur Conan Doyle's original stories.

"I like the idea of her not being there forever," said Abbington, who recently split from real-life partner Freeman after a 16-year-relationship. "She wasn't (there forever) in the books, so I don't think she should be in this. It's about Sherlock and John, and it should be about them.

"I don't want her to become the third wheel."

Co-creators Moffat and Gatiss still sound slightly bemused at the volcanic success of their modern-day take on the cerebral sleuth. When "Sherlock" debuted in 2010, Freeman had starred in the U.K. version of sitcom "The Office" but had yet to play Bilbo Baggins in "The Hobbit." Cumberbatch was best known for costume dramas and stage work.

"Benedict Cumberbatch went from 'Are you making that name up?' to the most famous man in the world, the most famous living Englishman, in the space of 90 minutes one Sunday," Moffat said.

During the first series, Cumberbatch and Freeman could film in London's teeming Trafalgar Square without drawing much attention. Now, crowds gather outside the nondescript building that plays 221B Baker St. on every shooting day there.

All this means the arrival of new episodes of "Sherlock" is a major TV event — and now a movie one, too. The last episode of the new series, "The Final Problem," will be broadcast in U.S. cinemas on Jan. 16 and 18.

Gatiss says there's no formula for the show's success.

"It's like bottled lightning," he said. "It'll never happen again. We've all had hits, but this is just a phenomenon."