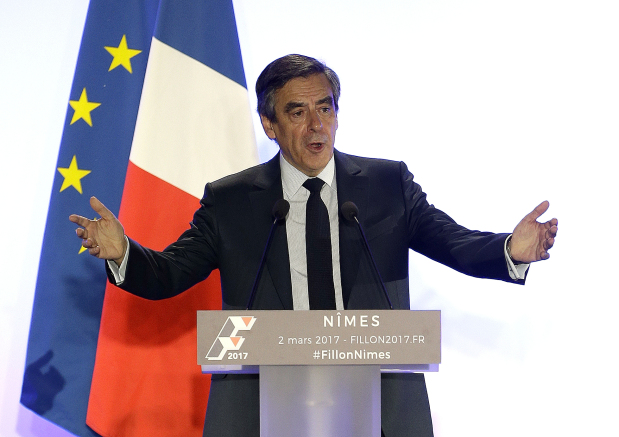 Paris: The once promising presidential bid of French conservative Francois Fillon, already seriously hobbled by pending corruption charges, was coming unravelled Friday with the resignation of his campaign director and his campaign spokesman, adding momentum to a stream of defections and panicking his party.

Fillon appeared increasingly alone with the resignation of two key officials, and other high-profile supporters following them out. But he did not balk. He looked past the pressure, counting on a support rally planned for Sunday near the Eiffel Tower and tweeting a video plea for people to show up in force "to show everyone what the will of the militants of France looks like."

A poor showing at the support rally would impact Fillon's legitimacy, which has been based on his win in the primary held by conservatives and centrists.

As Fillon's fortunes fell, former Prime Minister Alain Juppe again was being mentioned as a potential Plan B for The Republicans party, which could find itself without a candidate as the April 23 first round of the presidential election nears. A runoff between the top two candidates is May 7. Juppe had refused filling in for Fillon in the past.

"Don't let anyone deprive you of your choice. I ask you to resist," Fillon said in his tweeted video, an apparent reference to the defections and behind-the-scenes manoeuvering to replace him.

After Thierry Solere announced Friday he was bowing out as spokesman, becoming the most visible of Fillon's defectors so far, more severe woes were in store with the resignation of campaign director Patrick Stefanini.

A brief statement by the press office of Fillon's campaign said Stefanini presented his resignation Friday morning and that Fillon had accepted it. Critically, Stefanini is to stay on until the end of Sunday's rally, the statement said.

Financial prosecutors are investigating allegations that Fillon gave his wife and two of their children taxpayer-funded jobs they never performed. Fillon initially said he would step down if charged, but decided to maintain his candidacy even though he's been summoned to face charges on March 15.

His family members were paid more than 1 million euros ($1.1 million) over a number of years for work as his parliamentary aides. It is legal in France to hire relatives for public jobs, if they actually work. Fillon insists his wife and children did.

Fillon is not the only candidate in the firing line of judicial investigators.

Far-right leader Marine Le Pen is at the centre of several judicial inquiries along with her anti-immigration National Front party.

She has been summoned to appear next Friday before investigating judges in a case concerning her aides at the European Parliament. Le Pen has advised them she would refuse to show up during the campaign, her lawyer, Rodolphe Bosselut, said, confirming French press reports.

The European Parliament voted Thursday to lift her immunity in another case surrounding her tweets of gruesome images of the Islamic State group.

Unlike Fillon, Le Pen has not lost ground in polls, where she is vying for the top spot with an upstart independent centrist, Emmanuel Macron.

Fillon is struggling to survive. His campaign treasurer quit on Thursday, when three Republican lawmakers also announced they were withdrawing their support.

Other conservatives and centrists allied with them have resigned over the past two days, with some calling for the more moderate Juppe to return to the ring.

Nadine Morano, a former minister who backed Fillon's candidacy, was among those making a U-turn Friday. Morano urged him to withdraw his bid and cancel the solidarity rally, which she claimed could overheat.

"I'm among those who use their energy trying to convince Francois Fillon to step down," Morano said. "I'm worried that the French will not let us reach the second round."

Jerome Chartier, Fillon's special adviser, is remaining faithful to the candidate even though his companion thinks a way out is needed.

"The spectacle of this presidential campaign makes me sick. The violence of the public debate is unheard of," Calmels said in a statement.

While Fillon's popularity has nosedived in recent weeks, Juppe's is high enough to qualify for the second round of the election, according to an opinion poll published Friday.

In his tweeted video, Fillon said the election's stakes are higher than ever and that the contest involves a decision "between several conceptions of France and its future," the far-right or left.

Fillon used language in the video normally employed by Le Pen and her anti-immigration party, from "national sovereignty" to "vanquishing Islamic totalitarianism."

Le Pen, appearing at a town hall east of Paris on Friday, defended a topic which concerns her directly: the presumption of innocence.

"When (Fillon) declared that he would not be candidate if charged, I declared that this is an incoherent statement because in France, there is a principle named presumption of innocence," she said.