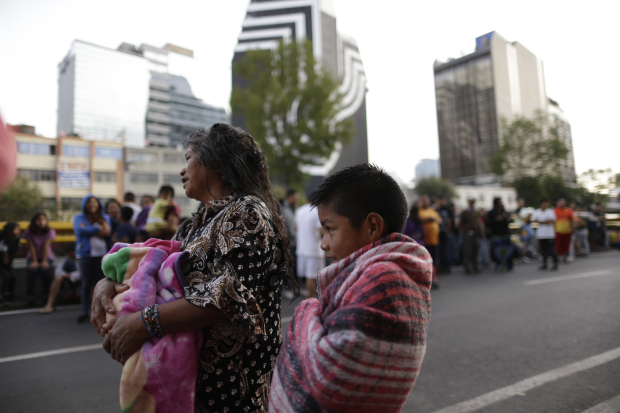 Mexico City: A magnitude 6.2 earthquake shook southern Mexico on Saturday and spread alarm in the capital, where rescuers temporarily suspended a search for survivors of a bigger tremor earlier this week out of fear of further building collapses.

The United States Geological Survey said the new quake was relatively shallow with an epicentre near Juchitan, a tropical region of Oaxaca state hard hit by another major earthquake on Sept 7.

Already shaken by the two recent earthquakes that have killed at least 384 people in Mexico this month, thousands of people ran out onto the streets again in Oaxaca and Mexico City, many in pyjamas, when seismic alarms sounded before the new tremor was felt shortly before 8 a.m. (1300 GMT).

"I heard the alarm and ran downstairs with my family," said Sergio Cedillo, 49, who was watching rescuers' efforts to find survivors from Tuesday's quake when the alarm sounded. A smaller earthquake was felt in Oaxaca at 8:24 a.m. (1324 GMT)

In a shelter housing those who have lost their homes in the quakes, people stood in a circle and prayed after the alarm sounded on Saturday.

Local media reports said a bridge collapsed near Juchitan on Saturday, after suffering damage in the earlier quakes.

The tremors were mild in Mexico City. No new damage was immediately reported, but to keep workers safe, rescue efforts were suspended in areas affected by Tuesday's quake, Luis Felipe Puente, the head of Mexico's civil protection agency said.

"We have to be very careful with the damaged buildings, because there is a risk of collapse," Puente told TV network Azteca.

When Tuesday's 7.1 magnitude quake hit, Mexico was already reeling from the Sept. 7 earthquake that killed at least 98 people and was the strongest in the country in 85 years.

At least 52 buildings were brought to the ground by Tuesday's earthquake and an army of trained rescuers and scores of volunteers have been frantically removing rubble in a day and night search for survivors.

Officials said there could be some 20,000 badly damaged homes in the adjacent states of Morelos and Puebla.

Mexican volunteers, professionals and soldiers backed by teams from countries as far away as Japan have so far saved 60 people from the rubble but nobody has been found alive in the past 24 hours. The quake killed at least 296 people.

Apartment buildings, offices, a school and a textile factory were among the structures flattened, leaving thousands homeless.

After several days of searching, rescuers had been finding more corpses than survivors before labours were suspended, and frustration was mounting at what some said were insufficient efforts by the government to save people and hand out aid.

Tuesday's massive quake hit on the anniversary of the deadly 1985 tremor that by some estimates killed as many as 10,000 people and destroyed scores of older buildings in the Mexican capital.

Mexico is better prepared to deal with the aftermath of earthquakes nowadays, helped by disaster planning, civic groups, a stringent building code and communication technology.

Despite the shrinking odds that more survivors would be pulled out from huge piles of debris, workers at many sites said they would not give up if there was the faintest chance at success.

At a collapsed office building in the trendy Roma district, volunteer coordinator Angel Ortiz, a 36-year-old taxi driver, pointed to the results of heat-sensing detectors that appeared to show signs of life somewhere underneath the rubble.

"There are still people alive down there," he said.