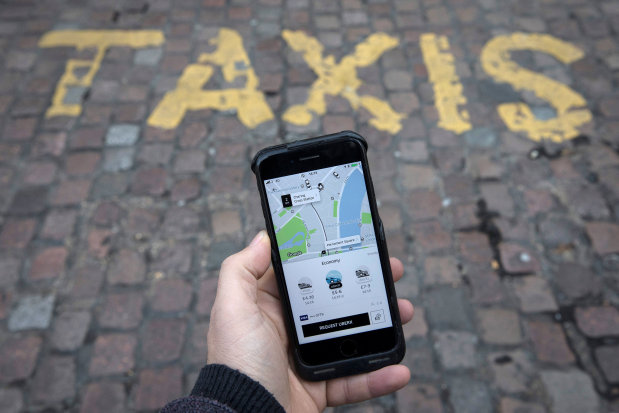 A photo illustration shows the Uber app on a mobile telephone, as it is held up for a posed photograph, in London, Britain November 10, 2017. REUTERS/Simon Dawson

San Salvador: Uber vowed Friday to adhere to transportation laws in El Salvador after a top official warned that the ride-hailing service must cease operations in the country and drivers could have their cars seized if they don't comply.

A statement from the company's Central America and Caribbean office said Uber believes it necessary to create regulations that differentiate between traditional services and those offered through technological platforms, as has happened in over 77 countries where it operates.

"We reiterate to authorities our willingness to cooperate in the development of an appropriate regulatory framework that includes these new technologies," it said.

Vice Minister of Transportation Nelson Garcia warned the previous day that Salvadoran law does not provide for the kind of private transportation services offered by Uber and said new legislation would have to be passed for it to be allowed.

He also said Uber drivers could face fines or have their licenses and plates revoked.

Lawmaker David Reyes from the conservative Republican Nationalist Alliance party proposed a bill Friday that would allow services like Uber to transport passengers.

Uber reported that just six months after launching in El Salvador, the service has grown to nearly 1,000 drivers and more than 33,000 users in the Central American nation.

"I like it. It is cheaper and safer (and) I ride in better cars, clean and with air conditioning," university student Estela Casillo said. "It is much easier to use an app than to out on the street to look for a taxi."

But Uber's launch has also angered licensed taxi drivers who say it takes work away from them.

"Today I only had one fare. My income has fallen," said Adolfo Salas, 48, who began driving a taxi after losing his job at a private company. "I pay taxes and they don't. It's unfair."