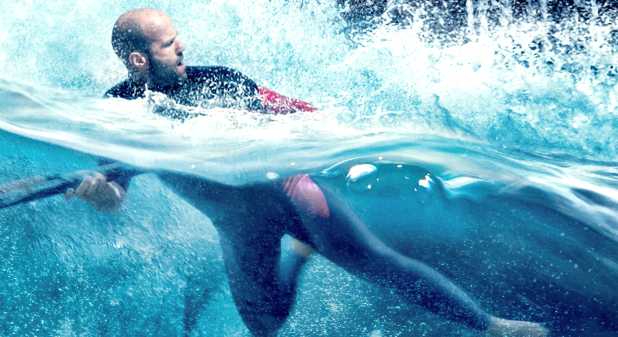 Statham in action in The Meg

BACK in the late 1990s someone gave me a copy of a paperback by author Steve Alten, about a giant, prehistoric shark.

It was dull and I only made it through a few pages before I lost interest.

However, this 180-degree U-turn owes more to the shark than its human co-stars.

If it wasn’t for the Chinese investment that went into the film, it’s possible neither Statham nor Li would get a look-in.

But Statham, the British action icon, has huge following in China, as does Li – whose other movies have included

This joint US-Chinese production, directed by Jon Turteltaub, is designed to appeal to audiences in both East and West.

While both actors play their part, they are overshadowed – both literally and figuratively – by a giant shark called a megalodon, which is supposed to be extinct.

The story starts on a Chinese oceanic research submersible, which comes under attack by a strange marine creature and ends up stranded at the bottom of the deepest trench in the Pacific.

Visionary oceanographer Dr Minway Zhang’s daughter Suyin (Li) makes her own unsuccessful rescue attempt, but Jonas Taylor (Statham, a former Olympic diver in real life) is then sent in to retrieve the crew of the submersible, including Taylor’s ex-wife.

Just when you thought things couldn’t get any worse, they do and the film becomes a frantic race for survival.

This modern-day Jaws, filmed with a $150 million budget, takes advantage of the latest in special effects, but spares us the blood and gore that might have kept more sensitive audiences away.

For this reviewer the toned-down gore was the only downside and the movie would benefit from a bit more bite, which is the only reason it doesn’t score a full 10 out of 10.

We have the Chinese government to thank for that, since some of the bloodier scenes were apparently removed to avoid sparking real-life panic on China’s beaches.

Yet the film is destined to be a hit and a sequel is already in the pipeline.

The Meg is being screened in at Vox Cineco City Centre, Seef Cineplex, Saar Cineplex, Wadi Al Sail, Mukta A2 and Vox The Avenues.