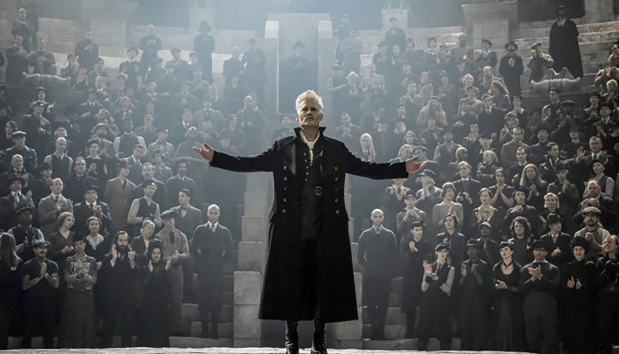 Johnny Depp in the movie

As an avid and obsessed fan of J K Rowling’s works, I must say I was setting my expectations pretty high for the sequel of Fantastic Beasts and Where to Find Them.

To be honest, The Crimes of Grinderwald didn’t meet my expectations, it exceeded them!

I went in expecting a blood bath and violent crimes, but I was rewarded with a plot twist I did not see coming and a deep human element interlocked with all the magic, anger, hope, hate and love the plot brings to life.

I was never a fan of villains but Johnny Depp as Gellert Grinderwald had me so entranced since the start of the film that I almost started believing in his cause.

The intertwined and tortured love stories tugged at my heart strings as well, giving the movie a lot more depth than just the typical struggle between good and evil.

The entire cast of actors, especially Eddie Redmayne as Newt and Zoe Kravitz as Leta Lestrange, had me on the edge of my seat for the entire 134 minutes of the feature film.

Not to mention Jacob Kowalski (played by Dan Fogler) is quite the character, infusing comedy at just the opportune moments.

The movie is packed with all the fan favourites such as boggarts, polyjuice potion, a secretive and overbearing Ministry of Magic, a foggy cemetery, the Elder Wand and even old Nicholas Flamel.

Then of course there is force of nature Credence Barebone (played by Ezra Miller), whose plight I felt for entirely as it must have been torture to exist without a name or a history to fall back on.

Vengeance driven purely by love is a powerful emotion that was portrayed so accurately on screen, along with a mixture of the darkest human natures of superiority intertwined with pureness of heart and innocence that made the movie a magical experience.

The plot twist and cliff hanger at the end left me with wild fire running through my veins burning to know what happens next.

The movie premiered on Tuesday at Mukta A2 and will open tonight in cinemas across Bahrain.