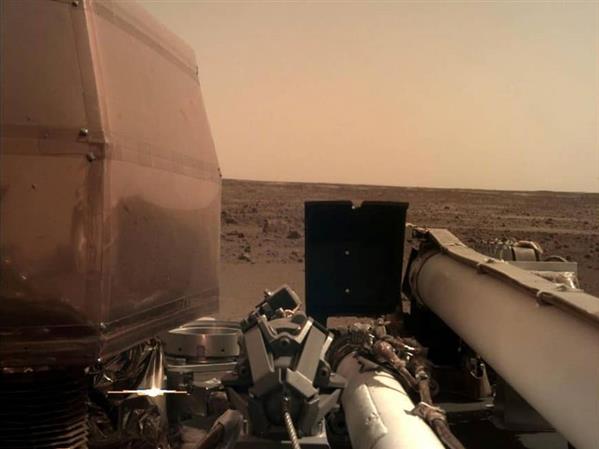 The Instrument Deployment Camera on the robotic arm of NASA's InSight lander took this image of the Martian surface on Monday after touching down. It was relayed to Earth via NASA's Odyssey spacecraft, orbiting Mars. (Reuters Photo)

Los Angeles: NASA's unmanned Martian quake sensor, InSight, has landed at a slight angle on the Red Planet, and experts are hopeful the spacecraft will work as planned, the US space agency said Friday.

"The vehicle sits slightly tilted (about 4 degrees) in a shallow dust- and sand-filled impact crater known as a 'hollow,'" NASA said in a statement.

InSight was engineered to operate on a surface with an inclination up to 15 degrees.

Therefore, experts are hopeful that its two main instruments -- a quake sensor and self-hammering mole to measure heat below the surface -- will work as planned.

"There are no landing pads or runways on Mars, so coming down in an area that is basically a large sandbox without any large rocks should make instrument deployment easier and provide a great place for our mole to start burrowing."

The first pictures from the lander show just a few rocks in the vicinity, more good news since touching down right near a rocky area would have made deployment of the solar arrays and instruments tricky.

Better images are expected in the coming days once InSight sheds the dust covers on its two cameras.

"We are looking forward to higher-definition pictures to confirm this preliminary assessment," said Bruce Banerdt, principal investigator of InSight at NASA.

"If these few images -- with resolution-reducing dust covers on -- are accurate, it bodes well for both instrument deployment and the mole penetration of our subsurface heat-flow experiment."