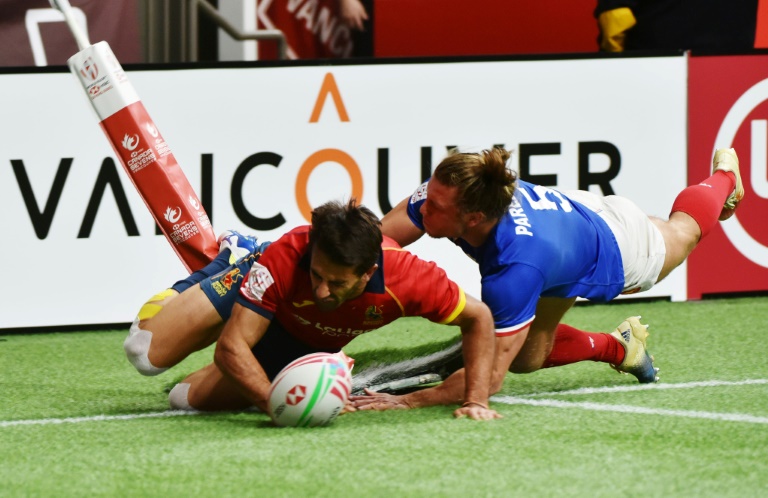 Spain’s Pol Pla (left) and France’s Stephen Parez get tangled up during France's 26-10 win on day one of the World Rugby Sevens Series in Vancouver, Canada. AFP / Don MacKinnon

Los Angeles: South Africa punched their ticket to the quarter-finals at the 2019 World Rugby Sevens in Vancouver with a 19-7 win over the United States on Saturday.

South Africa won all three pool matches during day one to finish atop the standings in Pool A.

Pool D leader England was the only other team to go undefeated on day one of the 16-team event.

The top two teams from each of the four pools advanced to the quarter-finals on Sunday at B.C. Place Stadium.

South Africa moves through to face Argentina and England will square off against the Americans. The 2018 champion New Zealand All Blacks face Fiji and the other quarter-final sees Samoa battle France.

The South Africans used a precision attack and superb defence on Saturday to beat the Americans, who came into this event as the series leaders after winning last week on home soil in Las Vegas.

The USA leads the title race with 98 points, closely followed by New Zealand on 93 and Olympic gold medallists Fiji in third with 84 points.

The All Blacks reached the quarters despite a shock 26-24 loss to Spain.

Spain had to rally from a 12-0 deficit to beat New Zealand on a late try by Pol Pla.

Hosts Canada regrouped to score an upset 26-19 victory over Fiji after being thumped 38-7 by Samoa in their opening game.

Canada beat Kenya 36-21 in their final game but they failed to advance when Fiji defeated Samoa 31-17.