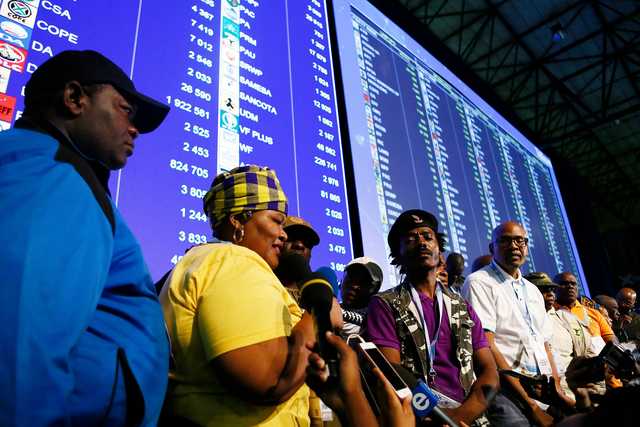 Leaders of various political parties give a press conference as they stage a protest at the Independent Electoral Commission (IEC) Results Centre on May 9, 2019 in Pretoria, South Africa. South African President's ruling ANC will retain its parliamentary majority after polls but with diminished support, complicating efforts to revive the embattled party and the country's flagging economy, results showed on May 9, 2019. The African National Congress (ANC), in power since 1994, surged into the lead with nearly 57 percent after more than half the voting districts were officially tallied following May 8 vote. (AFP Photo)

PRETORIA - The African National Congress (ANC) was headed toward victory in South Africa's election on Friday, though the party was on course for its worst performance since it swept to power a quarter of a century ago.

The poll was the toughest test yet for the ANC, which has ruled South Africa since the 1994 election. Nelson Mandela's former liberation party has not won less than a 60 per cent share of the vote since it came to power.

The ANC was in the driving seat for the parliamentary race with more than two-thirds of the voting districts counted.

By 0600 GMT, 75.6 per cent of ballots in 22,925 voting districts had been counted, showing the ANC to be in the lead with 57.21 per cent, while the main opposition Democratic Alliance (DA) was on 21.81 per cent and the leftist Economic Freedom Fighters (EFF) had garnered 10 per cent.

The ANC had hoped to reverse or at least arrest a slide in support after its efforts to address racial disparities in land ownership, housing and services since the end of apartheid faltered. South Africa remains one of the most unequal societies in the world, according to the World Bank.

Based on the latest results from the Electoral Commission, analysts predicted the ANC was set for a vote share of between 55-59 per cent. A poor showing for the ANC would embolden opponents of President Cyril Ramaphosa and risk a potential challenge to his leadership, analysts have said.

"The ANC will be elected with a record low of 27 per cent of the eligible population backing them, compared with 47 per cent in 1999. This kind of dynamic is not a mandate nor an impetus to change," said Peter Attard Montalto, head of capital markets research at Intellidex.

The rand steadied against the dollar in early trade on Friday, with traders saying the currency would remain volatile as markets digest the poll results.

"As the ANC win is digested, markets will swiftly shift their focus to the subsequent actions of the ruling party, including the announcement of cabinet ... as well as policies relating to expropriation of land without compensation," said Bianca Botes, corporate treasury manager at Botes Peregrine Treasury Solutions.

But his efforts have been constrained by divisions within his own party, where some Zuma supporters still retain influence and oppose his agenda.

"People have shown they are willing to forgive the ANC," said Ronald Lamola, a member of the ANC's top governing body. "We are looking at a clear mandate for our policies."

The ANC achieved its best parliamentary election result in 2004 under former president Thabo Mbeki, when it won more than 69 per cent of the vote. But its support fell under Zuma, and it lost control of big cities like Johannesburg, the commercial capital, in local government elections in 2016.

The party controls eight of the country's nine provinces. The DA has controlled the Western Cape since the 2009 vote.

The partial results showed ANC ahead in Gauteng province, where South Africa's biggest city Johannesburg and the administrative capital Pretoria are located, while the DA led in the Western Cape, home to Cape Town, where parliament resides.

Election officials said voting in general had progressed smoothly but that there had been isolated disruptions caused by bad weather, unscheduled power outages or community protests.