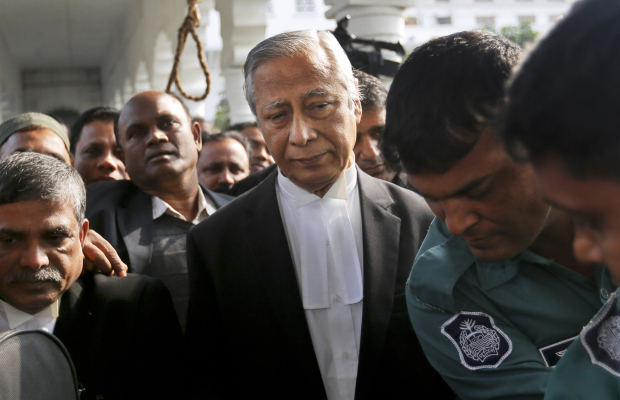 Dhaka: Bangladesh's top court on Wednesday upheld the death sentence on the leader of the largest party for crimes during the country's 1971 independence struggle, paving the way for his execution within months.

The Supreme Court dismissed an appeal by Motiur Rahman Nizami, head of the Jamaat-e-Islami party, who was convicted of murder, rape and orchestrating the killing of top intellectuals when he was a militia leader during the conflict.

"Most importantly, the death penalty was upheld for the killings of the intellectuals."

Nizami, 72, Jamaat's leader since 2000 and a minister in a former government of 2001-2006, faces the gallows within months unless his case is reviewed by the same court or he is granted clemency by the president.

Three senior Jamaat officials and a key leader of the main opposition party have been executed since December 2013 for war crimes, despite global criticism of their trials by a controversial war crimes tribunal.

The court swiftly dismissed previous reviews of those four opposition leaders on death row, leading to their execution -- the latest last November.

Hundreds of people who had campaigned for the  leaders to be tried for their roles in the 1971 war burst into impromptu celebrations at a square in central Dhaka.

"This verdict brings an end to the long and painful wait for justice for the families of the victims," said Imran Sarker, head of a secular group, showing a V-sign to reporters.

"We now want his quick execution."

Bangladesh came into being after the region called East Pakistan broke away from the rest of Pakistan in 1971.

Prosecutors said Nizami was the leader of a student wing of Jamaat during the war and turned it into the Al-Badr pro-Pakistani militia which killed top professors, writers, doctors and journalists in the most gruesome chapter of the conflict.

Their bodies were found blindfolded with their hands tied and dumped in a marsh on the outskirts of the capital.

The killing was carried out based on a hit-list Nizami ordered and the aim was to "intellectually cripple" the fledgling nation, prosecutors said.

Security was tight across the country. Previous convictions of the Jamaat officials triggered the country's deadliest violence since independence with some 500 people killed, mainly in clashes between supporters and police.

"We've stepped up security. It is sufficient to prevent any violence," deputy police commissioner Maruf Hossain Sorder told AFP ahead of the verdict.

However, Jamaat supporters clashed with police as they staged impromptu protests and marches in several towns and cities, police and local media said.

"We have detained two people from the scene," he said.

The party also called for a nationwide strike on Thursday, saying the charges against Nizami were "false, baseless and imaginary".

"The government wants to steer the country towards terrible conflict in a planned way by killing Motiur Rahman Nizami in cold blood through its own fixed blueprint," the party said in a statement on its website, calling him an "internationally acclaimed Islamic scholar".

Jamaat said Nizami would now seek a review of the judgement. Defence lawyer Khandker Mahbub Hossain told reporters they would decide their course of action after consulting him.

Since it was established by Prime Minister Sheikh Hasina's government in 2010, the International Crimes Tribunal has sentenced more than a dozen opposition leaders for war crimes.

The secular government maintains they are needed to heal the wounds of the conflict.