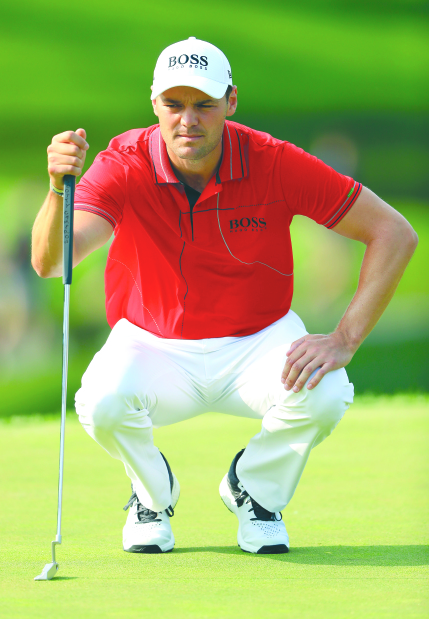 Martin Kaymer of Germany lines up a putt on the 18th hole during the third round of The Memorial Tournament Presented by Nationwide at Muirfield Village Golf Club on June 01, 2019 in Dublin, Ohio. (AFP)

DUBLIN: Former world number one Martin Kaymer surged into a two-stroke lead over Adam Scott after the third round at the Memorial tournament in Dublin, Ohio on Saturday.

Two-times major champion Kaymer, without a win since his eight-shot victory at the 2014 US Open, notched six birdies in a flawless six-under-par 66 at Muirfield Village.

The German, who says his mind is uncluttered after all but quitting social media, signed for a 15-under 201 total with one round left.

Japan’s Hideki Matsuyama had the day’s best score, chipping in for birdie from lush rough at the last for a 64 that lifted him within four strokes of Kaymer.

Americans Jordan Spieth (69) and Patrick Cantlay (68) are also four behind.

Kaymer had a wrist injury that set him back 18 months ago, but he said his recent poor form had been caused more by his state of mind than due to any physical ailments.

“I think social media and listening to a lot of the broadcasting and stuff can take a lot of energy and for me it’s more distracting than helping,” he told CBS television.