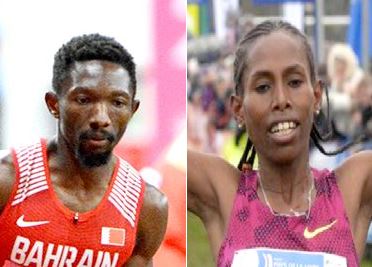 (L) to (R) Abubaker and Tigist

The meeting was an International Association of Athletics Federations World Challenge event.

Abubaker narrowly missed out on a victory in finishing second in the men’s 400 metres sprint, while Tigist had a strong showing in a hotly contested women’s 1,500m race as she finished sixth with a new personal best time.

In the men’s 400m, Abubaker put in a tough challenge but was beaten in the end of the single-lap run.

He completed the distance in a total time of 45.86 seconds, while Steven Gardiner of the Bahamas took the win in 44.95s.

Abubaker just managed to pip Luka Janezic of Slovenia at the end. Janezic had a time of 45.97s. Abubaker’s time was not far from his personal best of 45.02s, which he clocked just last week in a meeting in Poland.

Thapelo Phora of South Africa, Kyle Clemons and Kenneth Bednarek of the US, Martyn Rooney of Great Britain and Jan Tesar of the Czech Republic completed the final classification from fourth through eighth, respectively.

Meanwhile, in the women’s 1,500m, Tigist had a good performance amongst a field of 14 of the world’s top middle-distance runners.

Only three seconds separated the top seven finishers. The pacemakers did well to lead the pack over the first two laps, before Gudaf Tsegay of Ethiopia took over at the bell. Tsegay did well to maintain her advantage until the end, with Tigist finishing not too far behind.

Both Abubaker and Tigist were the only two Bahrainis competing last night in Ostrava.