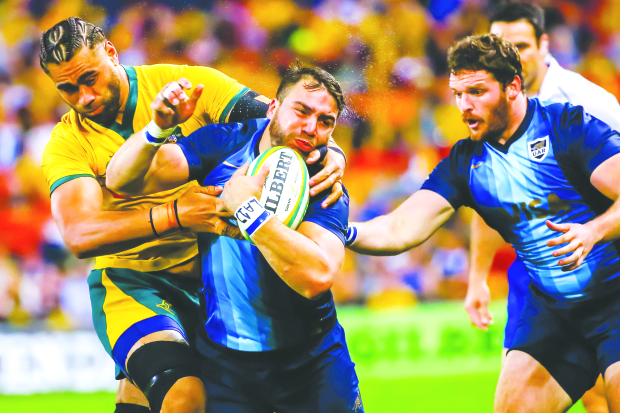 Brisbane: Australia recovered from last week’s loss to the Springboks to beat Argentina 16-10 in the Rugby Championship yesterday, giving scrum-half Will Genia an emotional send-off in his final Test here.

A week after their disappointing 35-17 loss to South Africa, the Wallabies gave Genia a fitting farewell at his home ground prior to his retirement from Tests after the Rugby World Cup.

He was outstanding against the Pumas, organising the backline brilliantly and often getting the Wallabies out of trouble with a fine kicking game.

Both sides scored one try each, but three penalties from Christian Lealiifano – back with the Wallabies after fighting off leukaemia – saw the Wallabies home in front of 32,000 supporters at Suncorp Stadium.

Former bad boy James O’Connor also came on in the second half for his first appearance since the Wallabies tore up his contract in 2013 following a series of transgressions.

The Wallaby defence, which leaked five tries in last week’s loss, was vastly improved this week as they easily handled the threat from the dangerous Pumas outside backs.

They held the visitors tryless until six minutes from full-time when number eight Facundo Isa crashed over at the back of a rolling maul to get the Pumas to within six points.

The win will give under-siege Australian coach Michael Cheika some breathing space after a series of poor results in 2018 and their defeat at the hands of the Springboks.

“I think we earned it, we worked hard,” Cheika said.

“We were able to build the game, build the score, through moments when we had the dominance, and in the moments we didn’t have dominance we found a way to get out of a jam.”

However, the Pumas will rue their lack of discipline in Brisbane.

The visitors, who were so impressive in their 20-16 loss to the All Blacks last weekend, dropped the ball at key moments against the Wallabies.

“The opportunities were there, there were two clear chances in the first half and one in the second, and we lost by six points,” Pumas coach Mario Ledesma said.

“But my concern is much more the set piece – the scrum in the second half and the lineout in the first – we were clearly dominated. It’s really difficult at the set piece, without quality ball, to win the game.”

After Lealiifano and Nicolas Sanchez traded early penalties, Argentina should have scored the first try in the 25th minute, only for front-rower Nahuel Tetaz Chaparro to drop the ball a metre out with the line wide open.

They were punished five minutes later when Australian winger Reece Hodge finished off a fine attacking move which started from an attacking scrum on the 22 metre line.

Lealiifano found Marika Koroibete on the inside, the big winger then dummying to centre Samu Kerevi before passing to fullback Kurtley Beale.

Beale then drew the defence before giving Hodge a simple run to the line to give the Wallabies a 10-3 lead at the break.

Lealiifano made it 16-3 in the second half with two penalties as the Pumas began to struggle at the scrum.

The Wallabies always looked in control, but they let the Pumas back in the game when they conceded a penalty at the breakdown with five minutes remaining.

From the ensuing line-out, Isa barged over to get the visitors within striking distance.

But they never looked like overhauling the Wallabies and an Argentina knock-on in front of their own posts was a fitting end to the game.