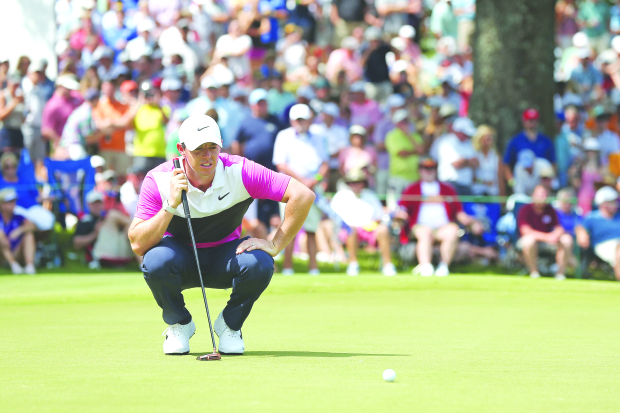 MEMPHIS, TENNESSEE - JULY 27: Rory McIlroy of Norther Ireland lines up a birdie putt on the 17th hole during the third round of the World Golf Championship-FedEx St Jude Invitational at TPC Southwind on July 27, 2019 in Memphis, Tennessee. Matt Sullivan/Getty Images/AFP

The four-time major winner from Northern Ireland fired an eight-under par 62 to stand on 12-under 198 after 54 holes at par-70 TPC Southwind in Memphis, Tennessee.

“To birdie the last three holes and take the lead puts me in a really great position going into tomorrow,” McIlroy said. “I’ve holed a lot of putts this week, which is nice.”

Third-ranked McIlroy’s second-lowest round of the season, eclipsed only by a 61 in the final round of his Canadian Open triumph last month, comes a week after a disappointing missed cut at the British Open at Royal Portrush in Northern Ireland.

It also booked the 30-year-old a first-ever Sunday pairing with four-time major winner Koepka in the last group for the final round of the elite World Golf Championship event.

“Rory is playing with some heat,” Koepka said. “I’m just going to have to take it deep.”

England’s Matthew Fitzgerald fired a 69 to stand third on 200, one stroke ahead of Spain’s Jon Rahm, Sweden’s Alex Noren and Australian Marc Leishman. McIlroy birdied the last three holes on both the front and back nine.

“I had a lot of good numbers where I could make a full committed swing,” McIlroy said. “One of my goals was to hit it pin high and I did that for most of the day.”

McIlroy sank a six-foot birdie putt on the opening hole and dropped one that was half as long at the third, then reeled off a 23-foot birdie putt at seven and back-to-back seven-footers for birdies at the par-3 eighth and par-4 ninth.

After finding water off the 12th tee and taking his lone bogey of the day, McIlroy answered by dropping his tee shot to five feet at the par-3 14th and sinking the birdie putt.

McIlroy then closed with a six-foot birdie at the par-5 16th, a 16-footer at 17 and his dramatic long birdie effort at 18.