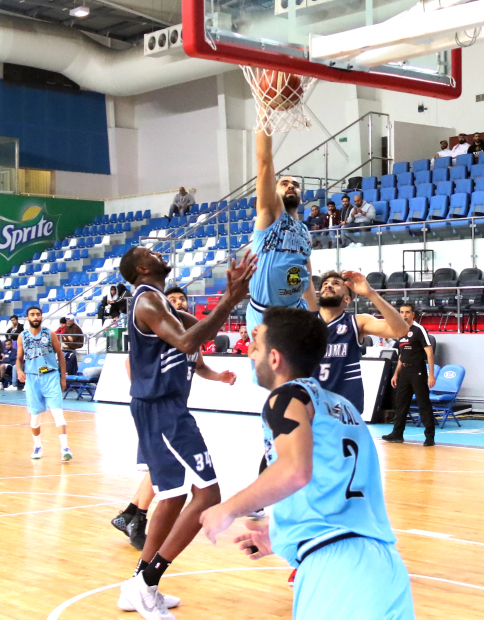 Action from the game between Riffa and Al Najma. Picture by ROY MATHEWS

Riffa got off to a fine start taking the first two quarters 20-14 and 23-16 for a 13-point advantage at half-time. Al Najma roared back after the interval taking the third quarter 23-15 and reducing the deficit to five points in the process.

The final canto was a thrilling affair with players of both teams vying for possession in a final push for victory. Riffa held their nerves as they managed to seal victory by seven points.

Subah Hussain was Riffa’s top scorer with 20 points including two three-pointers and three assists. The other major scorers for Riffa were Younis Kuwayed with 18 points and Joseph Jones with 17.

Al Najma’s scoring was led by Ali Jaber with 18 points. He was supported by Fadalallah Abbas with 16 points and Qassim Hassan with 14.

In the second game of the night, Manama displayed their class sweeping Al Hala aside in a commanding 98-63 win.

Manama were dominant in all the quarters giving Hala no opportunity to make any headway. They took the first quarter 19-15 and raced ahead in the second to stay well in control at half-time (46-28).

Manama continued in the same vein in the second half, taking the third quarter 24-18 before closing out with 28-17 in clinical fashion.

Ahmed Najaf paced the winners with 15 points while Christopher McKnight and Ahmed Salman contributed 14 each.