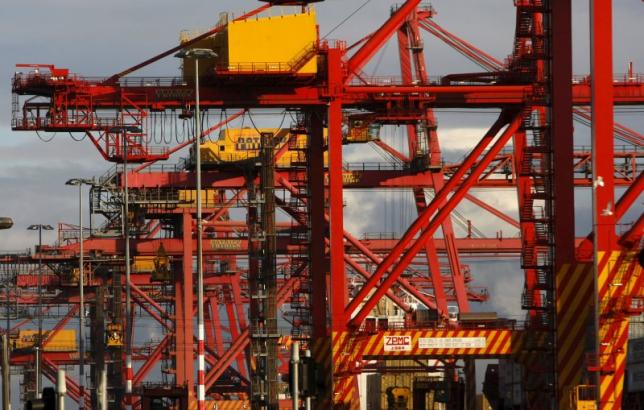 Shipping container cranes are seen at the Patrick port facility in Melbourne in this June 9, 2009 file photo. (Reuters Photo)

The announcement ended a bidding war for Asciano, a major Australian rail, freight and ports operator, between a consortium led by Canada's Brookfield Infrastructure Group and a group led by Australia's Qube that includes a Chinese sovereign wealth fund.

Qube will split the ports business with Brookfield, whose consortium members include government wealth fund the Qatar Investment Authority.

Qube said on  Tuesday the arrangement was a ‘highly attractive outcome for all stakeholders’ which would be ‘transformational’ and have ‘significant benefits’ for the firm.

The Sydney-based logistics and infrastructure firm also announced on Tuesday a Aus$800 million equity raising to fund its bid.

The deal is subject to shareholder and regulatory approval, including from the Australian Competition and Consumer Commission (ACCC) and the nation's Foreign Investment Review Board (FIRB).

"If I was an Asciano shareholder, I would be pretty happy with the price I got, because I don't believe under normal trading conditions... you would be able to extract that kind of value in the lifetime of you holding it unless you got taken over," IG Markets strategist Evan Lucas told AFP.

Lucas added that the joint bid was likely to be approved by the ACCC as the regulator no longer had to contend with concerns raised as part of the Brookfield bid that the Canadian asset manager's existing rail assets, when combined with Asciano's rail business, would substantially reduce competition.

The two consortiums previously made separate bids, with the joint-tender application given the go-ahead by financial regulator the Australian Securities and Investment Commission (ASIC). Asciano shareholders are expected to vote on the deal in early June.

Asciano specialises in bulk and container shipping and transportation, with port and train operations across Australia. It handles nearly half of all container traffic entering or leaving the country.

Brookfield's initial bid last year had come during a flurry of acquisitions in Australia's transport sector -- including Japan Post Holdings' purchase of Toll Holdings -- as the local dollar weakened and the nation's conservative government pushed for infrastructure spending.