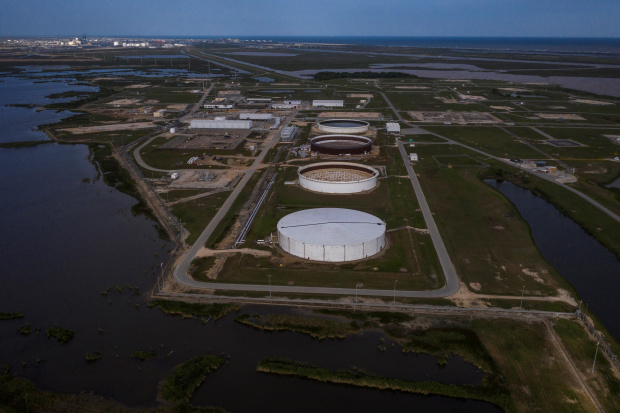 The Bryan Mound Strategic Petroleum Reserve, an oil storage facility, is seen in this aerial photograph over Freeport, Texas, US. REUTERS/Adrees Latif

London: Another big fall in oil prices dragged hordes of petrocurrencies under on Tuesday but even an HSBC warning of mounting bad credit and a near 80% plunge in BP's profits could not keep stock markets down for long.

There was some relatively good news to go with the bad and ugly numbers.

Plans to ease major economies out of coronavirus lockdowns were continuing, UBS lifted European banks 4% with reassuring earnings, while Italy's bonds recovered further after it had dodged a damaging credit rating downgrade on Friday.

Oil was total carnage though. US WTI, which went negative last week, dived 20% in Europe after a scramble by the United States Oil Fund (USO), the largest oil-focused US exchange-traded product, to shift its holdings had underscored the dwindling capacity to store excess supply.

Benchmark Brent was down a more manageable 4.7% but it was still below $19 a barrel which is miles beyond where even the most efficient producer countries can balance their national finances.

Petrocurrencies were hit too. Canada's dollar and the Norweigen crown were both around 0.2% lower, Russia's rouble was down nearly 0.4%, while Brazil's record low real and Indonesia's rupiah had both tumbled 1% overnight.

"Normally, a lower oil price disproportionately boosts consumer sentiment. However, the storage problem is due to reduced oil demand - if you are not putting petrol in your car, you will not notice the price," UBS chief economist Paul Donavan said.

"The good news is that the money saved by not buying petrol now may be spent later in the economic bounceback."

Away from wild oil, there were signs that the market volatility triggered by the rapid spread of the coronavirus over the last few months was easing.

The US stock market's so-called fear gauge, the VIX , was at its lowest in a month and the US dollar was a tad softer against other major currencies at 107.055 yen per dollar and $1.08697 against the euro.

Markets are looking for any forward guidance from the US Federal Reserve, which meets later on Tuesday and is due to issue a statement on Wednesday. The European Central Bank then meets on Thursday.

The Fed has led the global monetary policy response to the coronavirus pandemic by cutting interest rates to zero and aggressively buying bonds and corporate credit - a programme it extended overnight to include municipal debt of smaller US cities.

Analysts said it was unlikely that the Fed would make further major policy moves, given the scope and depth of recent action to counter the economic damage caused by Covid-19.

Sweden's central bank had opted not to take its interest rates back into negative territory on Tuesday, sending its currency up 0.5% and to its highest in over a month.

"The major central banks are at comparatively expansionary levels. All of them have beefed up asset purchases as much as they could. All of them are close to or even at the minimum lower interest rate bound," wrote Thu Lan Nguyen, an analyst at Commerzbank.

"They are likely to remain there for the foreseeable future, which would point towards relatively stable exchange rates."

The ECB has had less room to manoeuvre on rates and announced an enormous bond-buying programme. Still, bickering and indecision over a eurozone rescue package has some in the market expecting deeper action still, perhaps as soon as Thursday.

That has seen the euro left behind as expectations for an economic recovery from the pandemic has pressured the US dollar and driven a rally in riskier currencies such as the Australian dollar.

Still, the fresh fall in oil put the brakes on the charging Aussie, which had climbed more than 1% earlier and has recovered nearly a fifth from a 17-year low struck last month.

Elsewhere, the pound rose 0.3% to $1.2456, having earlier been pressured after Prime Minister Boris Johnson warned it was too dangerous to relax a strict lockdown in Britain.