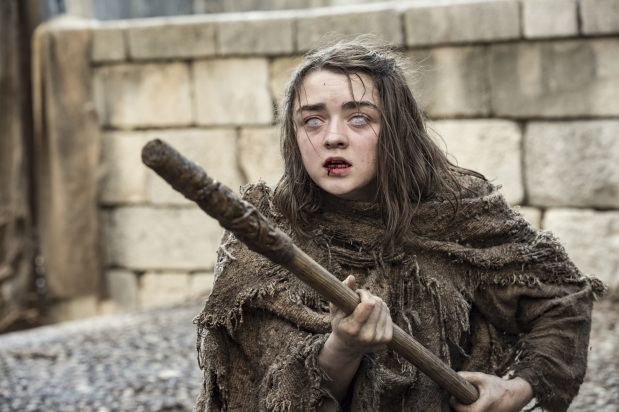 This image released by HBO shows Maisie Williams as Arya Stark in a scene from, 'Game of Thrones,' premiering its sixth season on Sunday at 9 p.m. (AP Photo)

It was a cliffhanger unparalleled since "who shot JR?" but 10 months of agony are finally over Sunday as 'Game of Thrones' returns to reveal the fate of Jon Snow. The record-breaking fantasy serial ended its fifth season in June last year with the character stabbed and left for dead by mutinous followers, sparking intense debate about whether he really had met his end.

With more than 20 million Americans glued to each episode, the show's return has been touted as the biggest TV drama event since JR Ewing, the infamous antagonist in prime-time soap opera 'Dallas,' was gunned down in 1980. HBO's first full season six trailer released in early March opened and closed with what appeared to be a lifeless Snow where viewers left him, his body lying prone in a puddle of his own blood.

"He's gone," the knight Davos Seaworth opined ominously, to the backdrop of a plaintive cover of Chris Isaak's 'Wicked Game.' The 100-second sneak peek at season six promised more of what viewers have come to expect from the fictional world of Westeros -- sex, violence and intense storylines for which the show has garnered widespread acclaim.

'Game of Thrones' tells the story of noble families vying for control of the Iron Throne, all the while keeping one eye on the 'White Walkers' leading hordes of the undead toward an invasion from the North. Nashville-based entertainment industry analyst Shawn Robbins described the show as part of a "new golden age of television" drawing global audiences to social media to debate its plotlines.

"There's something very attractive to today's audiences about developing connections to these stories and sharing the experience with other people," he told AFP. "Game of Thrones, and the recent 'Walking Dead' season finale, have been great examples of how cliffhangers and the dangling fates of beloved characters capture a zeitgeist and elevate their already high 'event' statuses."

While many viewers of AMC's 'The Walking Dead' may have spoiled the next series by reading the comic, season six of 'Game of Thrones' moves past George R.R. Martin's 'A Song of Ice and Fire' novels for the first time. Showrunners David Benioff and Dan Weiss have kept their cards close to their chest but told Variety magazine that the first season with no source material to rely on was the "strongest year of the show to date."

Benioff said production "became a real endurance test for everyone on the crew," with filming taking place in five countries, at times using up to four crews at the same time.

The pair have killed off rumors of a possible spin-off, announcing that they would soon use up all their ideas and were considering following the sixth season with 13 final episodes split between two shorter runs. "Whatever happens to Jon in 'Game of Thrones: Season 6', it appears from all the trailers and officially released photos that this will be the most exciting and potentially violent season yet," wrote David Harris, of the "Winter Is Coming" fan blog.

Such has been the clamor for insights into the fate of the show's favorite characters that fans have resorted to complex mathematics in an attempt to work out where the plot will go. A computer science class at the Technical University of Munich in Germany has scoured 'Game of Thrones' data to find who will die next using an array of machine learning algorithms.

One algorithm, which accurately predicted 74 percent of character deaths in the show and books, has several surprises in store, the university said in a statement, placing a number of characters thought to be relatively safe in grave danger. The season six opener, entitled 'The Red Woman', premieres on HBO at 9:00pm ET on Sunday (0100 GMT on Monday).

Three US cities -- Atlanta, Boston and Denver -- have theater screenings planned at the same time, while the ATX Television Festival in Austin, Texas, is also screening the opener.

Outside of those involved in the production and accredited media, the only American who got a chance to see the show early was President Barack Obama, according to Benioff and Weiss.

"I think for both of us, finding out the president wanted advance copies of the episodes -- that was an 'Aha!' moment," said Weiss, giving the game away at a recent preview screening.