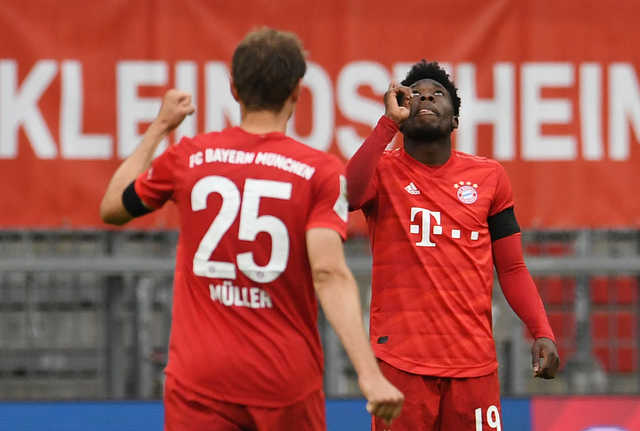 The Bavarians thought they had the match wrapped up after efforts from Leon Goretzka, Thomas Mueller and Robert Lewandowski had given them a 3-0 lead in the empty Allianz Arena.

Yet the visitors then quickly gave away two goals - with Alphonso Davies pouncing on a defensive error on the hour and Hinteregger scoring an own goal in the 74th minute.

Earlier, Dortmund scored a goal in each half through Raphael Guerreiro and Achraf Hakimi to beat hosts VfL Wolfsburg 2-0 for their sixth straight win to stay on the heels of leaders Bayern.

Portugal international Guerreiro tapped in a cutback from Thorgan Hazard after Erling Haaland had failed to connect in the 32nd minute, and Hakimi fired in from a fine Jadon Sancho assist - his 16th of the season - in the 78th to make sure of the three points.

Bayern, who had former player and club boss Franz Beckenbauer watching from the stands in a rare public appearance, are on 61 points with Dortmund, who host the Bavarians on Tuesday, on 57.

It was the first match to be played without fans at Bayern’s home ground but the champions looked unaffected as Mueller set up their first goal with his 17th assist of the season and grabbed the second himself.

Poland striker Lewandowski, chasing Gerd Mueller’s 40-goal record haul from the 1971-72 season, hit his 27th of the campaign a minute after the restart before Hinteregger’s two goal scare.

But Bayern kept their cool for their 12th win in their last 13 games that kept them favourites for an eighth straight title.

Dortmund were far from their best in their 2-0 win at Wolfsburg and are hoping defender Mats Hummels can recover from a heel injury, that forced him out at half-time, for Tuesday’s game against Bayern.

Germany international Kai Havertz scored a brace for the second match in the row to lead Bayer Leverkusen to a 3-1 win at Borussia Moenchengladbach as they leap-frogged their opponents to go third on 53.

Earlier, Kai Havertz scored a brace for the second match in a row to lead Bayer Leverkusen to a 3-1 win at Borussia Moenchengladbach as they leap-frogged their opponents to go third.

After beating Werder Bremen 4-1 in their first game back since the coronavirus stoppage, Leverkusen got off the mark in the seventh minute.

Gladbach lost possession in midfield, the ball was played wide to Karim Bellarabi and he found Havertz who slotted it past Yann Sommer for his ninth league goal of the season.