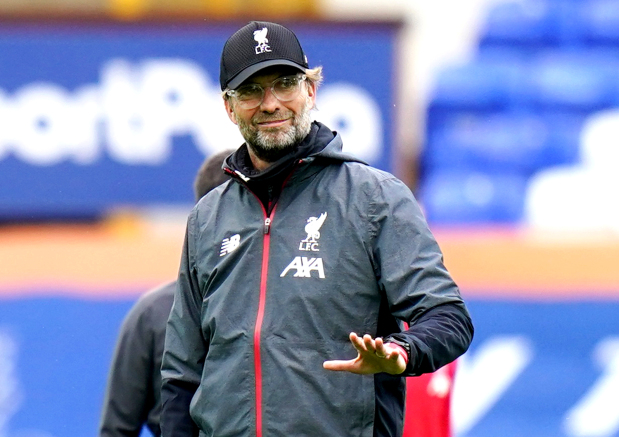 Soccer Football - Premier League - Everton v Liverpool - Goodison Park, Liverpool, Britain - June 21, 2020 Liverpool manager Juergen Klopp during the warm up before the match, as play resumes behind closed doors following the outbreak of the coronavirus disease (COVID-19) Jon Super/Pool via REUTERS EDITORIAL USE ONLY. No use with unauthorized audio, video, data, fixture lists, club/league logos or "live" services. Online in-match use limited to 75 images, no video emulation. No use in betting, games or single club/league/player publications. Please contact your account representative for further details.

Klopp said he watched City beat Burnley 5-0 on Monday and marvelled at their dominance as Guardiola made eight changes to the starting lineup to showcase their squad depth.

Liverpool are due to play City on July 2, after Guardiola’s side play Chelsea, and the title could be decided by then with seven games to go but Klopp said his sole focus was tonight’s opponents, Crystal Palace.

“What I realised when I watched the game last night was how is it possible that any team is 20 points ahead of this team, that’s unthinkable,” Klopp told reporters in a virtual news conference.

“We must have obviously done a couple of things really well and right. But no, I don’t think about whether City can catch us, I think about Crystal Palace... I’m only concerned about what we are doing in the next game and not what City are doing.

“I watch them because we play them in nine days, not for hoping that they lose. I wanted them to lose last year against Leicester (City) but that didn’t work really well so that’s why I stopped doing that.”

City pipped Liverpool to the title last season by a single point and the turning point was a hard-fought 1-0 win over Leicester City in their penultimate game.

Palace were the last team to win a league match at Anfield back in 2017 and Roy Hodgson’s side come into the contest on the back of a four-match winning run.

“Roy is doing an incredible job there,” Klopp said. “The organisation of the team is really at the highest level, the team is physically strong with a good setup.

“They’ve had four games in a row without conceding a goal. It’s all positive from their point of view but we have our own targets.”

Klopp confirmed Mohamed Salah and Andy Robertson were back in contention but James Milner and Joel Matip would not be available.