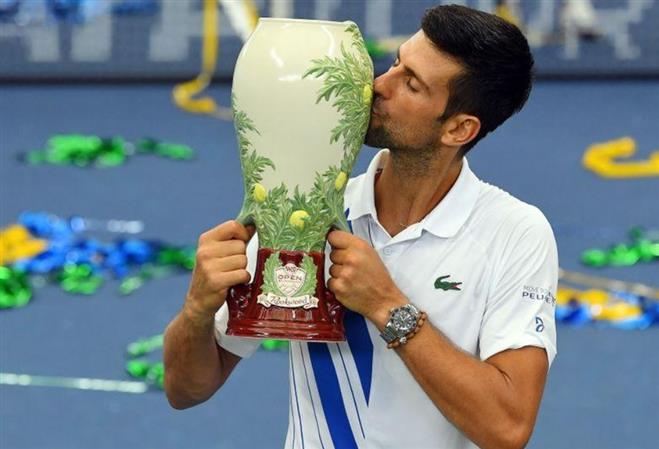 Off-court distractions and a neck injury could not prevent Novak Djokovic from extending his winning run this year to 23 matches and the Serbian could not be in more intimidating form ahead of the U.S. Open.

Djokovic clinched his 80th career title and equalled Rafa Nadal’s record of 35 Masters 1000 wins when he rallied from a set down to beat Milos Raonic in the Western & Southern Open final on Saturday.

“I am trying to make the most of my career, trying to use this time when I feel that I am physically, mentally, emotionally, game-wise at (my) peak and playing some of the best tennis that I have ever played,” the world number one told reporters.

“Going on an unbeaten run so far this year obviously brings even more confidence each match. I’m just trying to enjoy it and embrace the process.

“How long that journey is going to last and what kind of legacy I’m going to leave behind, that’s on somebody else to really judge and evaluate.”

In the absence of his rivals for the title of greatest men’s player of the modern era, Djokovic is odds-on favourite to win his fourth crown at Flushing Meadows for an 18th Grand Slam triumph that would put him one behind Nadal and two behind Roger Federer.

The 33-year-old will open his U.S. Open campaign against Damir Dzumhur in the evening session on an empty Arthur Ashe Stadium on Monday.

He looked unbeatable in his early matches at the Western & Southern Open at Flushing Meadows before coming to within two points of losing to Spaniard Roberto Bautista Agut in the semi-finals.

Raonic broke Djokovic’s serve twice to win the opening set of the final 6-1 but Djokovic again shifted to a higher gear to emerge victorious.

Before the 2020 season was halted in March due to the Covid-19 pandemic, he had won the ATP Cup with Serbia, an eighth Australian Open and a fifth Dubai title

It was not all plain sailing on court last week, however, as he needed medical attention on a neck injury a few times and there have been off-court issues to deal with.

Djokovic resigned as president of the players council of the men’s ATP Tour and floated a breakaway association for the athletes, facing stiff resistance from the governing bodies as well as Federer and Nadal.

“There’s been a lot of off-court things that I kind of had to be involved in directly or indirectly,” he said on Saturday.

“It was not easy, definitely, especially in the last three, four days. It has been challenging mentally and emotionally for me to stay sane and be able to compete on the highest level and win this title.”