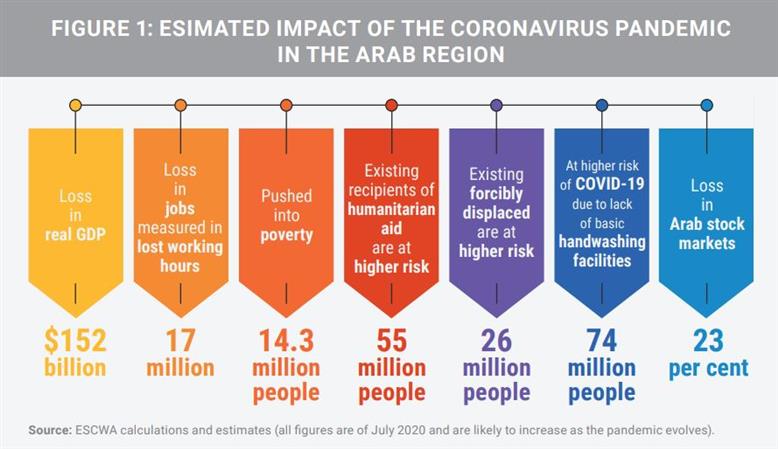 MANAMA: The Arab world is expected to lose $152 billion due to the Covid pandemic, according to the UN.

The region’s economy is expected to contract by 5.7 per cent, with the economies of some Arab countries projected to shrink by as much as 13pc, according to estimates by the UN Economic and Social Commission for West Asia.

Another UN agency, International Labour Organisation, estimates a loss of 17 million full time jobs in the second quarter of this year.

The grim estimates are outlined in a study, ‘Policy brief: The impact of Covid-19 on the Arab region’.

The pandemic has wiped out 10 years of UN efforts in the field of sustainable development worldwide, the report adds.

The Arab region and North Africa are considered among those most impacted by it, the report said.

The ranks of the poor in the Arab world are estimated to rise by 14.3m should the virus last, while the overall number of people living below poverty line will rise to 115m, which is a quarter of the entire Arab population.

The report warns that the consequences of the pandemic are likely to be deep and long lasting.

Compared with the $9.6 trillion in stimulus packages across the world, the cumulative fiscal stimulus in the Arab region amounted to only $102bn, equivalent to nearly 4pc of the region’s GDP at a time when 55.7m people in Arab countries need humanitarian aid, it pointed out.

In the region, the GCC countries have managed to react swiftly and effectively to the crisis, an expert said.

Dr Amer Al Roubaie, an economics professor, told our sister paper Akhbar Al Khaleej that currently 1.6bn students across the world are out of school with no more than 66pc of students in some countries being able to access the Internet and computer.