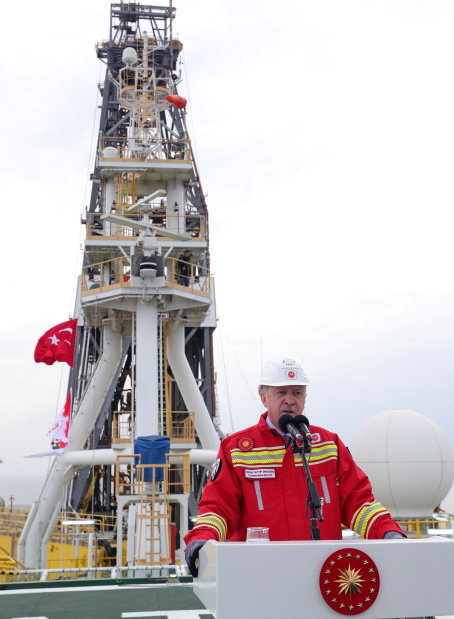 Turkish President Tayyip Erdogan speaks on the deck of the drilling vessel Fatih off Black Sea city of Zonguldak, Turkey October 17, 2020. Presidential Press Office/Handout via REUTERS ATTENTION EDITORS - THIS PICTURE WAS PROVIDED BY A THIRD PARTY. NO RESALES. NO ARCHIVE.

The Fatih drill ship made the discovery about 100 nautical miles north of the Turkish coast. Even before yesterday’s revision, analysts had said that the find represents a major discovery and was one of the largest global discoveries in 2020.

“Work in this borehole has been completed after reaching a depth of 4,775 metres as planned previously,” Erdogan said, speaking onboard the Fatih.

He said the vessel would start new operations in a different borehole in the same field, called Sakarya, next month after returning to port for maintenance. Another ship, called Kanuni, is also headed to the Black Sea for drilling operations, he said.

Turkey expects the first gas flow from field in 2023.