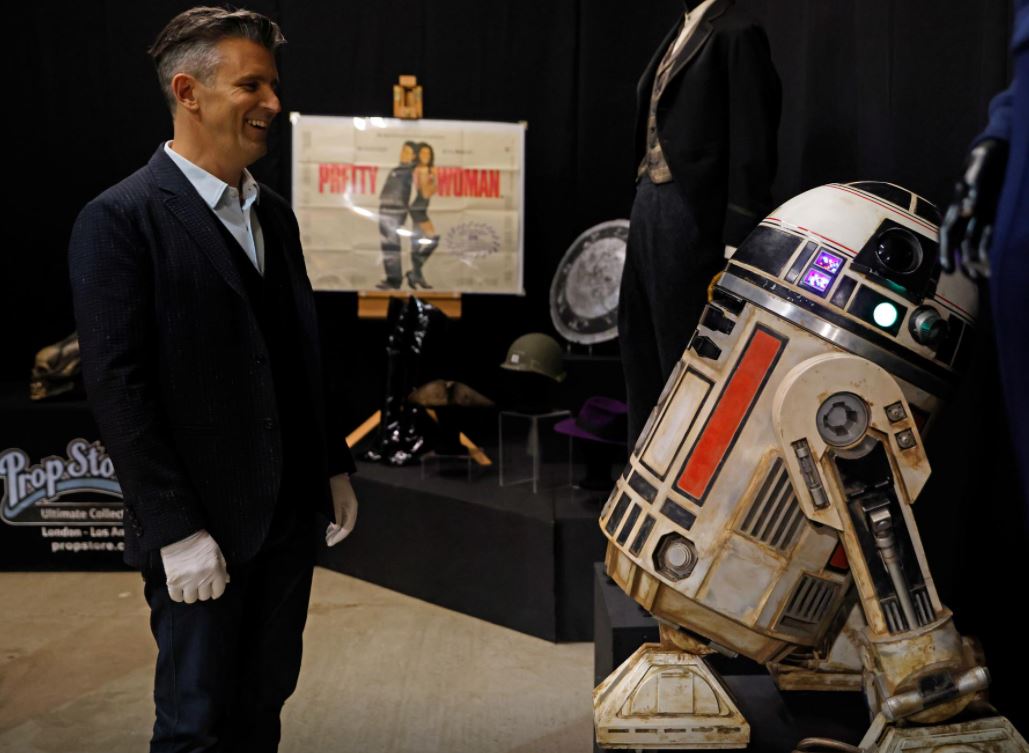 Stephen Lane, CEO of Prop Store, poses for a photograph with a R2-S8 droid from the Star Wars film, Solo: A Star Wars Story, at a preview of a movie and TV memorabilia auction in Rickmansworth, Britain October 15, 2020. REUTERS/John Sibley

London: Film fans will have the chance to get their hands on the thigh-high patent leather boots worn by Julia Roberts in “Pretty Woman” or Tom Cruise’s “Top Gun” bomber jacket when nearly 1,000 items of movie memorabilia go on sale in an auction in December.

The artefacts in the annual Prop Store Entertainment Memorabilia Live Auction have been hunted down by Prop Store boss Stephen Lane through his network of filmmakers, cast and crew members, production companies and collectors.

“I started Prop Store out of my passion for collecting and so it’s all about the hunt,” Lane told Reuters in his company’s warehouses in Rickmansworth, near London.

“A lot of these artefacts are just thrown away at the end of production or certainly used to be. They were just disposed of or sold off. And that meant they just went to the four winds,” Lane said.

Some of the items on this year’s list turned up unexpectedly.

Lane, a passionate “Star Wars” fan, was visiting a crew member who had laid out his treasure trove of props from the sci-fi series in his house.

He spotted another piece of movie magic - the crystal ball that David Bowie uses in “Labyrinth”.

“We’d spent like three hours up in one room looking at all the ‘Star Wars’ and downstairs, and it was a piece he just didn’t think anybody was going to be interested in, and I was like ‘that’s the cherry right there’.”

In total, more than 900 items from over 350 films and television shows will be auctioned in the two-day online sale.

The snakeskin suit worn by Bill Nighy in “Love Actually” is estimated to sell for a more modest £400.

The client viewings and sale would normally take place in central London but the coronavirus pandemic means most of the action this year happens online or in the Prop Store warehouses.

The pandemic has had an unexpected effect on interest in movie memorabilia, Lane said.

“The amount of views on our auctions have been absolutely through the roof this year,” he said.

“What we put that down to is the fact that people just really aren’t entertaining. They’re not travelling, they’re not moving around,” he said.