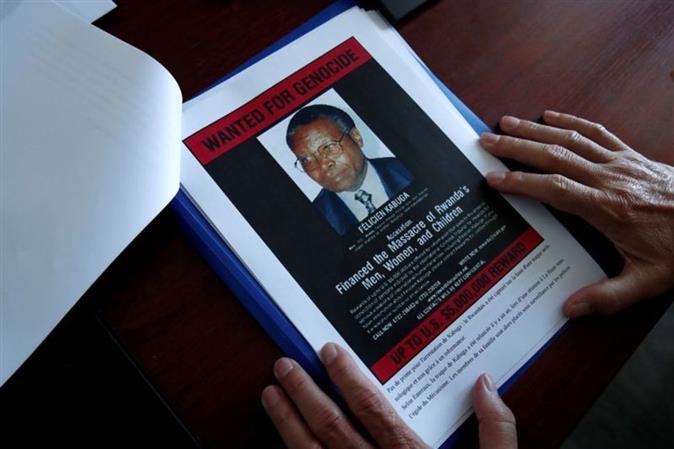 Eric Emeraux, head of the Gendarmerie's Central Office for Combating Crimes Against Humanity, Genocides and War Crimes (OCLCH), displays documents with a wanted poster depicting a photograph of Felicien Kabuga during an interview with Reuters at his office, about the arrest of Rwandan genocide fugitive suspect Felicien Kabuga, in Paris, France, May 19, 2020. (Reuters Photo)

AMSTERDAM - A United Nations judge on Wednesday ordered that Rwandan genocide suspect Felicien Kabuga, who has been in a French jail since May, be sent to a detention unit in The Hague out of health considerations amid the coronavirus pandemic.

The decision means Kabuga, 84, is likely spend at least several months in The Hague and be brought before an international judge there for an initial appearance in his war crimes case, rather than in Tanzania as planned.

U.N. prosecutors accuse the former tea and coffee tycoon of bankrolling and importing huge numbers of machetes for ethnic Hutu militias who killed hundreds of thousands of Tutsis and moderate Hutus in Rwanda during a 100-day period in 1994.

Kabuga, who has yet to appear before the U.N. court, dismissed accusations against him as "lies" during French extradition hearings.

Kabuga was arrested near Paris in May after two decades as a fugitive. A French court ruled on Sept. 30. he could be turned over to U.N. custody in Arusha, Tanzania.

But Judge Iain Bonomy said in a written decision from Arusha, "I consider that there are exceptional circumstances and that it would be in the interests of justice" to have Kabuga sent to The Hague for the time being.

Kabuga's lawyer Emanuel Altit told Reuters he was satisfied his request for his elderly client to be brought to The Hague instead of Arusha was granted.

"For us, respecting Felicien Kabuga's rights is the top priority. This includes his transfer to The Hague," he said.

Former U.N. tribunals for war crimes in Rwanda and Yugoslavia have been rolled over into a successor court that has offices in The Hague, Netherlands, and Arusha.

Bonomy's order said the court has yet to receive Kabuga's medical files, and the relatively short distance between Paris and The Hague meant Kabuga's transfer there would pose "far less risk".

He said the date of Kabuga's initial appearance is not certain partly because he must be quarantined for 10 days after arrival.