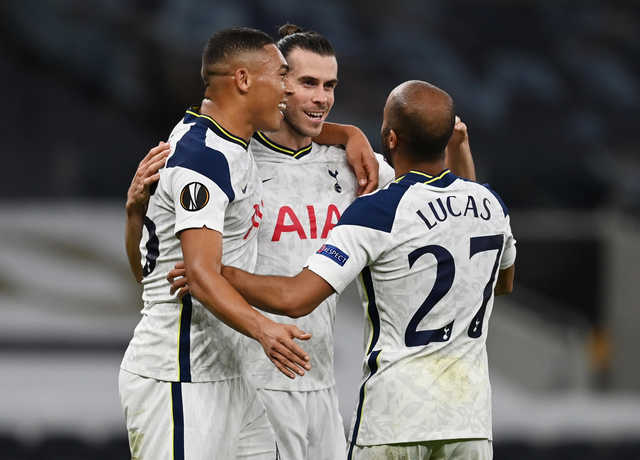 LONDON: Gareth Bale started for Tottenham Hotspur for the first time in seven years and helped them to a 3-0 win over Austria’s LASK in their first match of the Europa League group phase last night.

Lucas Moura opened the scoring after 18 minutes and Bale’s square pass was turned into his own net by Andres Andrade nine minutes later for a two-goal halftime lead.

Substitute Son Heung-min added the third in the 84th minute to ensure a winning start for Spurs to their Group J campaign.

AC Milan’s Rade Krunic, Brahim Diaz and Jens Petter Hauge netted in a 3-1 win at Celtic in their Group H opener but the Italians had to withstand a late barrage from the Scottish champions to secure the three points.

AZ Alkmaar overcame the loss of 13 players with positive Covid-19 tests to secure a shock 1-0 win at Napoli.

The Dutch side were under pressure for the whole game as Napoli dominated possession and peppered their goal but Dani de Wit scored in the 57th minute for a stunning victory in Group F.

Arsenal, who have not claimed a European trophy since lifting the old Cup Winners’ Cup in 1994, went behind at Rapid Vienna but defender David Luiz and striker Pierre-Emerick Aubameyang struck late goals for a 2-1 Group B win.

AS Roma also managed to come back from a goal down to beat Swiss side Young Boys 2-1 away thanks to two goals in five second-half minutes by Bruno Peres and Marash Kumbulla to get their Group A campaign off to a winning start.

Bayer Leverkusen went on the rampage against French side Nice in a 6-2 victory that saw winger Karim Bellarabi score twice late on for the home side in Group C.

Spanish clubs Granada and Real Sociedad enjoyed 2-1 and 1-0 away wins over PSV Eindhoven and Croatian side Rijeka in Group E and F respectively, while Benfica chalked up a 4-2 victory over Lech Poznan and Rangers won 2-0 at Standard Liege in Group D.